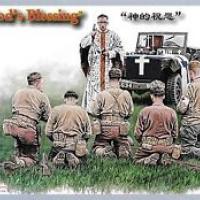 For a sometime now, Bronco Models has been releasing numerous military figure sets in 1:35 scale, and has particularly shown an eye for the not-so-typical. Sure, there has been the British AFV crew set and the U.S. Tank crew set, and both the 17 pdr and 25 pdr Anti-Tank gun crew sets. But they have also offered the British War Correspondents set and the Allied Female Soldier set. As a Minister, they then caught my eye earlier this year with the release of “God’s Blessing”, a 6 figure set depicting a Priest and five U.S. soldiers during WWII. The Priest (a Catholic Priest) is shown leading a front line mass, with his sacerdotal implements on the hood of a jeep. Kneeling before him are five soldiers, two of whom are holding Bibles (or, perhaps Prayer books). The box art captures this unique scene – worship in the midst of war.

There is no set of instructions inside the box, as the assembly instructions as well as a paint guide are provided on the back of the box. The painting guide chart references Gunze Sangyo, Hobby Color, Humbrol and Tamiya paints, and the colors are referred to by name of color for each of the figures. There is a variety of uniform matches, even with just five figures – four GI’s are wearing buff colored jackets, and one is wearing a rust brown shirt. Three are wearing brown pants, while two are wearing the greenish/blue slacks (which, incidentally, is not referenced in the paint guide). The Priest, of course, is wearing his clerical gown and vestment. These are worn over his khaki pants and shoes.

The kit is comprised of two sprues of four sections each (A through H) of light grey styrene plastic. These sprues contain the pieces for five soldiers and one Chaplain (Priest), along with a brief case, two candlesticks, two chalices, and one Cross (Crucifix). There are also 24 ammo packs for the soldier’s belts. What is missing, even though shown in the Box Art scene, are the soldiers helmets and rifles, both of which are laying close by in the grass. In my opinion this is an unfortunate omission, but easily rectified by a visit to your spare parts box (or, purchasing some after-market WWII helmets and rifles).

Overall, the moldings are good, with no flash and very slight seams that will need to be cleaned up. Perhaps the worst seam is the one that runs from ear to ear across the top of the head. You will need to be careful removing this seam as it is in the hair textured area. One nice feature, given the way the five soldiers are posed, is that the hands are separate from the arms and are interlocked in a praying posture. The detail of these hands, along with the ones holding a Bible, are very good.

There is a small decal sheet with a Red Cross insignia for the one soldier who is a medic and has an arm band that is to painted white. There is also a 1st US Infantry patch (Red 1 Insignia), but there is no indication which one of the soldiers should have it on his sleeve. I decided to put it on the Medic as the other soldiers each have rank stripes to be added to their sleeves. There are stripes for two Privates, one Corporal and one Sargent. The majority of the decal sheet however is the Cross within a circle emblem to be affixed to the Priest’s vestment. There are 161 of them, and each one will have to be applied separately!

The only real fit issue is the Priest’s legs which attach to the torso, but which must allow for the inclusion of the inner gown, over which goes the vestment. I recommend attaching the legs to the gown first (G4 is the back and G5 is the front0. Once the legs with the gown are assembled, you can then glue the assembly to the upper torso. Later, the vestment will cover most of this seam.

Once all the figures were assembled and the seams filled with putty and sanded, I sprayed them with a primer coat of Tamiya grey primer. The next step would be the painting, which I would do all by brush using various Vallejo paints.

Painting began with the all-important head and face area. A little off-white was painted in each eye socket and followed by a touch of black to show the pupil. Each face received a base coat of Vallejo Basic Skin tone (70815), and that was followed by a highlighting coat of Vallejo Beige Red (70804). I wanted to make my soldiers look like they have taken a few moments from the dirt and grime of combat to attend this battlefield Mass. Accordingly, then, their faces will be highlighted with darker washes to resemble that dirt and grime, along with some “five o’clock shadow.” To accomplish this I further highlighted each face with washes of Vallejo Flat Earth (70983) and Flat black (70950).

With each soldier hatless, special attention needs to be given to the hair. The trick here is to keep texturing the hair area to get away from any monochrome look. I changed up the color of each soldier’s hair somewhat and for the Priest, I decided to give him some graying, especially around his temples and sideburns.

The Priest’s gown and vestment was first brushed with Off-White (70820) and then a second coat of flat White was applied. The red border and inside portion of the vestment was painted with Flat Red (70957). The sash and the Prayer book (or Bible?) were painted with flat Black. The tassels of the sash with cut with a knife to feather the ends and then painted with Brass (70801) to represent gold.

The areas on the arms which would receive the chevrons and stripes decals were treated to Future, as was the entire vestment on the Priest. Once dried, the decals went on with little problem. The Priestly vestment is a little tedious with all the individual crosses, but it turns out you do not need to do all 160 crosses provided. I do not believe there is enough room to place them all. Another coat of Future covered the decals and sealed them in. Once dry, a flat coat of Tamiya Flat Base mixed with Alcohol and Future was added to all the figures.

The last bit of detail is to assemble the Priest’s briefcase kit, along with the painting of the two goblets, the two candlesticks and the Crucifix. These were all painted with Silver (70997). The case was painted with Red Leather (70818) and brushed with Burnt Umber (70941). As mentioned above, it would have been nice to have some rifles and certainly some helmets to lay down on the ground next to the soldiers. These important items would not have been very far from these GI’s, even during such a calm and peaceful moment like prayer and worship.

The Box art shows this battlefield Mass being conducted from the hood of a Jeep. Eventually I will present mine in front of a bombed out church window (Italeri “Church Window”, No. 408). I will need to add a small wooden table set up, upon which the Crucifix, Goblets, Candles and case will sit.

I certainly recommend this unique wartime figures set from Bronco Models. Adding the Jeep, or some other vehicle, or whatever environment you choose, will allow for an instructional and inspirational diorama to your collection. I would like to thank both Dragon Bronco Models and also IPMS/USA for the opportunity to build and review this kit.