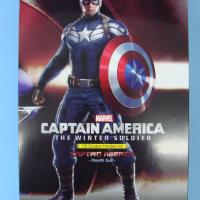 Making his first appearance in comic books in 1941, Captain American began fighting the Axis Powers as a patriotic superhero. Fast-forward to today and Captain America (Steve Rogers) has had his own movie, been a member of The Avengers movie, and most recently again held the main stage in Captain America: The Winter Soldier.

The newest release from Dragon is a replication of the Stealth S.T.R.I.K.E. suit from the Winter Soldier movie. “This is the end product of exhaustive CAD design, and the heroes are made with an eye to perfect accuracy and authenticity”. This phrase is directly quoted from the Dragon site and it is not a lie. The level of detail in this 3D printed cast model is astounding. The mesh in the gloves to the detailed mesh in the face mask is recreated accurately. The likeness of the figure head without the mask to actor Chris Evans is remarkable. In a nutshell, with the price of 3D printing coming down, I should hope to see more kits to this detail coming out more regularly.

The kit itself is very simplistic and could be packaged in a much smaller box. In all the kit is comprised of 16 parts - two heads, torso, legs, hands, boots, head insert, arms, a belt, shield, two shield forearm straps, and the base. The fit of the kit is spot on with only minimal effort to remove any mold lines.

The first step I took was to assemble the kit in its entirety and prime it starting with gray over everything, then under shading and highlighting with black and white primer. After which, I base coated the kit in a custom mix of blue and brown for the uniform and leather. The next stage I used Scale 75’s Flesh Set to paint the face and hands, and followed up with base coloring the silver on the uniform with Citadel chainmale silver.

After the base coats were on I separated the kit to individual pieces and began shading and highlighting the parts accordingly. After I was satisfied with the overall look of each part, I reassembled the kit, washed it with a dark blue oil wash, and finished off any additional high and low lighting paying close attention to my light source for the overall look.

The shield forced me to put my thinking cap on. The metallic, shimmering, look of the shield had to be replicated. My solution was that I painted the shield with Alclad aluminum. The beauty with Alclad, is that the more you put the material on, the brighter it becomes. So I got the aluminum set to where I was satisfied with it, and used additional Alclad to make light reflections from the center of the shield outward to add additional life to the still figure. After the aluminum was complete, I topped off the red and blue portions of the shield with transparent color to keep the reflective quality of the shield intact. Lastly I put the small strap through the hand of the Captain and attached the other to the shield. After putting the arm through the forearm loop, I glued the hand strap in place.

Lastly, I shot the entire model with Testors Acryl flat clear with the exception of the shield to give it a more natural look.

The kit itself is very simplistic. The level of detail is extraordinary and the work done with the CAD design and 3D printing shows. I can only hope that more companies take on the same process and embrace the technology of 3D printing as it continues to come down in price. Thank you to Dragon for making a great kit and supplying it for review!

Back view of Painting