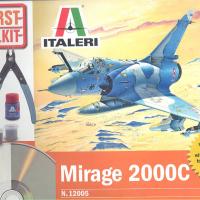 This kit is one of a series which Italeri recently released. The idea is a great one, getting young people and adults interested in modeling by supplying everything you need in one box, including a DVD with video instructions.

The kits in the series are:

The kit is the same mold as used by Revell for their Tiger Meet Mirage 2000. That being said, it’s a good choice for this type of model, as it is not a snap-kit, but it isn’t incredibly difficult either.

I started by putting the DVD in my DVD Player. It wouldn’t read the DVD. The problem is that there are 6 zones for DVD media; Europe is Region 2, and the US/Canada are Region 1.

I eventually discovered that the DVD Player/Recorder in my computer (Windows XP) could be made to read a Region 2 DVD. The trick is that you can only make the change 5 times, then you have to return it to the manufacturer to be reset. The manufacturer can do this 4 times. To save you a lot of trouble, there’s a short version of the video on YouTube at: https://www.youtube.com/watch?v=bYYte9iGTpo . This is a 2 ½ minute digest of the 40-minute DVD. You can form your own opinion about the background music. I turned the sound off.

I did screen captures from the DVD, displayed below. Note that these guys are VERY brave, dipping all the decals in water at once, not cutting the decal apart. Also, the decal shown is missing the ejection triangles and rescue arrows. They are on the kit decal sheet.

Besides the DVD and the model, you get a plastic bag with 3 plastic jars of paint and a small bottle of glue. In mine, the glue had leaked. This makes the plastic bag a super idea, as the leaking glue could have ruined the entire contents of the box. As it was, the papers included with the paint and glue absorbed the leak, and there was no harm. There was some glue left in the bottle, and I used it.

Also included is a tool kit with everything you would need to complete this project. These items are a set of sprue cutters, a file, a round medium brush with a blunt, non-pointed tip, and a pair of tweezers.

I could have built this kit using my many years’ experience and all the tools I’ve accumulated in that time, but I didn’t think it would be fair to the “new modeler” to use techniques and equipment which weren’t available in the box. I held to this until the very end of the project, when I used Future under the decals and flat coat over the markings. I also used CA at one point in the construction, but no filler, no airbrush, and only the tools provided.

The kit has a decent interior. If I were using “expert” mode, I would have made or borrowed a decal for the consoles and instrument panel, as well as other colors for the seat and interior. As it was, the only colors available for the interior were the plastic gray and black. Also, the brush provided is a bit large to do fine detail like the seat, but I discovered that a quick wipe with a tissue could remove excess paint while it was still wet. I used the Italeri glue provided, and it worked well.

After the interior is inserted in one of the fuselage halves, the other half is glued on. Again, I used the Italeri glue here, but while gluing the halves together, I ran out of glue. I fell back on Tamiya Extra-Thin cement for much of the project, although I sometimes used Testors Liquid thickened with tube glue where I wanted a longer working time.

I painted the exhaust, but left it off until I finished the main paint job, rather than fooling with masking or trying to paint the edge without getting gray on the black exhaust.

I have to give this kit good marks for general fit. Usually, the intakes are more than troublesome, and there are gaps along the wing/fuselage joint which look like rain gutters. On this kit, while you can see where the parts meet, there aren’t huge mismatches or gullies. I used no filler on any of these parts, as none was provided, and I was trying to stay with the spirit of doing a beginner’s model.

Once the wings and intakes were on and the little strakes on the vertical stabilizer and the intakes were added, I painted the aircraft.

It has been a long time since I brush-painted an aircraft his big. I painted the underside and most of the top with the lighter bluish gray, and let it dry for a couple of days. Then I came back with the darker gray, following the diagram in the instructions. I disagree with the FS numbers called out on the instructions, but when you’ve got 3 colors and one of them is black, there’s not much choice but to go ahead and put the paint on.

I did have some trouble with brush marks, as the paint is pretty thick as provided. The video shows using water to thin the paint, but I was really afraid to use too much, as then I’d get into coverage problems. I did manage to paint the canopy and windscreen using the provided brush. This time the thick paint was a plus, as it stayed put where it was applied with a pretty clean edge.

I now applied a coat of Future to prep for the decals. It may be cheating, but…….

These decals are printed in Italy by Zanchetti Buccinasco. I’ve never heard of them, but the decals are of good quality, on register, and were no trouble to apply. They could be moved around after they were put on the plane, and didn’t tear, wrinkle, or deform. These decals are marvelous for a first-time modeler. Once the decals were on, I put on another coat of Future and then acrylic clear flat. These pretty much covered up those brush marks I left in the paint job.

I painted the wheels way back when I was doing all that black in the interior. No use wasting paint. The landing gear was left in the gray plastic, as were the missiles. The missiles look OK, and there’s certainly no way you’re going to paint them with the colors provided.

Again, everything fits nicely and the gear is sturdy and easy to assemble. I used Krystal Kleer to put on the canopy and windscreen. I could have used Elmers Glue, and I’m certainly not going to chance ruining the canopy with liquid cement.

The refueling probe was a little difficult, as there’s no hole, slot, or depression to fit it into while the glue sets.

Recommended. The DVD was a little difficult to get going, but it’s doable, particularly if you have a geek in the neighborhood. The tools are very good, and the sprue nippers are superior. The paints were certainly not what I’m used to, but I got an OK finish, which was an accomplishment considering that I have dozens of better brushes that I didn’t use.

The kit itself is a superior job of design and molding, fit is very good. Except for having to cheat on the wing, I used no materials not provided, not counting the glue, which would have worked if it hadn’t leaked.

Thanks to Italeri, MRC, IPMS/USA, and Steve Collins for taking me back to my roots, about 50 years ago, before I got my first airbrush.