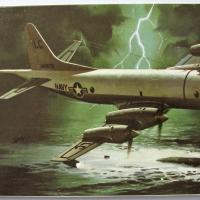 The P-3 Orion was designed for use by the US Navy as a submarine hunter and replaced the Neptune. The P-3 was nearly twice as fast as the Neptune and its range increased by almost 60% over that of the P2V. The first Orion was delivered to the US Navy Squadron VP-8 in July 1962 and within six months this unit was fully equipped with P-3's. This kit is a reissue of the old Revell kit that was first released in 1965.

Upon opening the box you will find a lot of white plastic, 48 pieces, attached to parts of sprues. The detail is raised and there are many rivets, also there is a lot of flash, pin marks and some sink marks to boot. (Face it, some of us that are this old OR OLDER have some of these same issues!) The decal sheet is printed cleanly and in register and you get a 4 page fold out for instructions.

Before starting construction, I decided to sand, or at least attempt to sand off all the rivets….I got most but not all. 7 steps and you have a P-3 for your collection starting with the fuselage, horizontal stabilizers and tail stinger. The main problem here is the fit of the stinger as it leaves a gap that needed to be filled. I also added 6 size 5 fishing weights as this is tail heavy. Step 2,3 and 4 are the construction of the engines & propeller and the landing struts. I left the props off until after the aircraft was painted though. Steps 5 & 6 are the wing assembly and there is a lot of cleanup needed for the seams in the wings. Step 7 is the final assembly….landing gear, gear doors, underwing radar, and tail stand. No problems here except the gear doors need a lot of patience as the really is no location points for them. Since I used weight in the nose, I didn’t bother with the stand.

You are given two marking options in this kit:

I chose to do the VP-8 markings and the decals went down quite easily. Tamiya white and True Colors Light gull grey were used.

Another fun old kit re-boxed by Atlantis. Yes, it has a lot of flash and no, there is not much detail. SO WHAT! It was fun and this is the first time I have built one. (Never built it as a kid….didn’t have gun turrets!) I recommend this kit to any modeler, young or old.

I would like to thank Atlantis Models for not just supplying it but for brining it back after all these years, (Looking forward to the 1/104 PBY-5A!!) and the review corps for letting me build it!