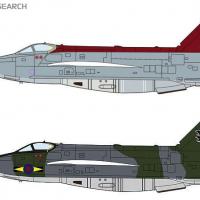 The British Electric Lighting served 34 years from its first flight on August 30, 1954 to its retirement from service on April 30, 1988. One of the more spectacular fighters of the cold war era, the Lighting is remembered for its amazing take offs that pitched up to the vertical soon after lift off. This was not a feat common to aircraft of the period. The Mk 6 was the last of the Lighting models to serve the RAF. It had wings plumbed for over wing fuel tanks to extend range and was fitted with two 30mm cannons in the forward belly bulge. This version of the Lighting was a common sight to Russian Bear pilots who regularly poked near British airspace just to see if someone was paying attention. I’m sure it was a sad day indeed for the members of No. 11 Squadron when their Lightings were replaced on April 30, 1988 by F-4 Phantoms.

That’s right, this is one of the recent releases where an existing kit is doubled up and boxed with some new decal options. In this case you get two of Hasegawa's venerable Lighting Mk 6s of 1989 vintage. All the things you would expect from a kit this old are there including raised panel lines, a very basic cockpit with pilot figures, no intake or exhaust openings and blank wheel wells with thick doors for the landing gear. The good stuff? Two kits for the price of one and three decal options. In addition to the No. 5 and 11 Squadron schemes on the box top you have a bare metal bird from No. 23 Squadron. I took this review on to give me a break from the Pirate Ship I’m reviewing and so decided to build what came in the box except a couple of resin seats I had in the spares box.

Each kit consists of 47 parts on three grey trees and one clear. Putting them together is a very quick affair. You get two instruction sheets. One is for construction and the other sheet is the paint and decal directions included in the kit. Since my efforts of focused on the exterior I blacked out the cockpit areas and used the kit instrument panel decal. I did cut back the rear cockpit opening to accommodate the resin ejection seats. The fuselage halves required some filing and putty to level them out. I did not try to restore the lost panel lines.

I chose the box top options since I built a bare metal Lighting a few years back. Both birds have bare metal sections and the shiny intake rings. All of those areas were undercoated with gloss black and then finish coated with Alclad Polished Aluminum. Since I was masking the metal areas for subsequent paint I used Alclad because it doesn’t lift off when taped. Figuring out colors was the only nit pick of the project. Hasegawa references Gunze and Mr. Color numbers without any cross-reference to brands I can actually get. As it turned out I used Testor colors by the names in the instructions except for Barley Grey. For that, I used Testors Aggressor Grey. To avoid masking the camouflage on the No. 11 Squadron Lighting I sprayed the grey undercoat and hand painted the RAF Dark green. Several coats of Future built up a glossy surface for the decals.

There are a lot of decals for such small models including lots of thin straight lines. For the most part the decals went on without any issue. When I use Future under coats I always put a little future under the decal when I slide it on the model. I’ve found this is the best way to avoid silvering. If you use setting solution, always test to make sure it is compatible with Future. I used Sovaset on a few that wrapped around tight curves but be careful! When I attempted to use it on underside stripes it dissolved the decal. Good thing there’s three decal sets in the kit. Once the decals were done, I flat coated everything to dull the Future except the metal areas. The canopies were up next. The framing detail is not promant enough to show through tape. I used a fine black sharpie to outline the frames so it would show through tape then rattle canned them black. The No. 5 Squadron bird gets Aggressor Grey over that. The landing gear is actually really well done but the gear doors let them down being too thick for the scale. My favorite part was being able to use the over-wing fuel tanks. This became a common sight on Mk 6s since it reduced aerial refueling and increased mission endurance at the expense of speed. I just think they look cool!

This was a perfect break from tedious rigging on my other review project. When the box arrived, I took one look and said I’m going to put these together quickly and just enjoy the process. Mission accomplished. For those who so desire, there are aftermarket goodies out there that would boost the basic details provided in the box. I could have used the pilot figures and avoided the seat issue but it was easy since I had the parts. My duo wouldn’t win any contests but they look good next my Trumpy Lighting. Many thanks to Hobbico and Hasegawa for giving us a double dose face lift to some oldies. Thanks also to IPMS for the opportunity to build these for you.