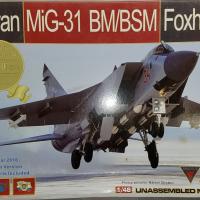 The Mikoyan MiG-31 (NATO reporting name: Foxhound) is a supersonic interceptor aircraft developed for use by the Soviet Air Forces. The aircraft was designed by the Mikoyan design bureau as a replacement for the earlier MiG-25 "Foxbat"; the MiG-31 is based on, and shares design elements with the MiG-25. The MiG-31 has the distinction of being one of the fastest combat jets in the world. It continues to be operated by the Russian Air Force and the Kazakhstan Air Force following the end of the Cold War and the collapse of the Soviet Union in late 1991. The Russian Defense Ministry expects the MiG-31 to remain in service until at least 2030. Like the MiG-25, the MiG-31 is a large twin-engine aircraft with side-mounted air intake ramps, a shoulder-mounted wing with an aspect ratio of 2.94, and twin vertical tailfins. Unlike the MiG-25, it has two seats, with the rear occupied by a dedicated weapon systems officer. The MiG-31 is limited to only 5 g when travelling at supersonic speeds. While flying under combat weight, its wing loading is marginal and its thrust-to-weight ratio is favorable. However, the MiG-31 is not designed for close combat or rapid turning. The wings and airframe of the MiG-31 are stronger than those of the MiG-25, permitting supersonic flight at low altitudes. Like the MiG-25, its flight surfaces are built primarily of nickel-steel alloy, enabling the aircraft to tolerate kinetic heating at airspeeds approaching Mach 3. The MiG-31 airframe comprises 49% arc-welded nickel steel, 33% light metal alloy, 16% titanium and 2% composites. Its D30-F6 jet engines, each rated at 152 kN thrust, allow a maximum speed of Mach 1.23 at low altitude. High-altitude speed is temperature-redlined to Mach 2.83 – the thrust-to-drag ratio is sufficient for speeds in excess of Mach 3, but such speeds pose unacceptable hazards to engine and airframe life in routine use. The MiG-31BM is one of only a few aircraft able to intercept and destroy cruise missiles flying at extremely low altitude. (Source: Wikipedia)

Avantgarde Model Kits (AMK) is a new(ish) manufacturer on the scene, with only a few kits on the market. If their Mig-31 is any indication, we can expect good things from them in the future. The AMK Mig-31 comes in a large, solid, top-opening box. Sprues are individually packaged in cellophane, and some parts (missiles, fuselage sections) come in their own boxes. Parts are molded in a medium gray styrene that is fairly hard compared Tamiya or Hasegawa. Panel lines are a little heavy. A small fret of photo-etch (radar and seatbelts) is included, and the transparent parts come in both clear and smoke-shaded. Decals are spread over two large sheets and included lots and lots of stencils. The special edition version comes with a neatly package set of metal parts for the landing gear and pitot tube. This is a very nice addition considering the size and weight of the model. Color callouts are in FS Numbers (no mfg paint codes are provided).

The engineering of the kit is unique in that there are very few seams to deal with, really limiting the amount of filling and sanding needed. Construction starts with the engines, intake trunks, main landing gear wells and lower fuselage. The hard plastic meant going through lots of blades, as a less than new blade would tend to take chunks out of the plastic rather than cutting cleanly. The intake trunks and wheel wells share a common wall, and the corrugations on both sides are well-represented. The large engines cleanly join the intake trunks and into the lower fuselage. Instructions called for installing some of the gear doors and struts at this point, but I held off as they would stick out and be easily broken off. The upper fuselage is a very tight fit and everything needs to be aligned just right for it to go on. I glued along the seams and clamped it overnight to assure a solid join.

The forward fuselage is beautifully molded as a hollow single piece using slide molds. There was a little cleanup of the mold seems, but this was far easier than dealing with glue joints along the detailed sections. The cockpit slides into this from the back, and the seats are added afterwards. Instructions were vague as to the location of some of the side panels and I had to relocate them to get the rear instrument panel in place. I used Tamiya Coral Blue for the cockpit, and used the provided decals for the instruments. With some Micro-Sol, the decals readily conformed to the plastic details. There are lots of PE seatbelts and straps that attach to the seats, and the instructions are pretty vague as to their location. If I were to build this kit again, I would likely use an aftermarket seat belt set. I added a lot of weight to the nose to stop the model from sitting on its tail. The forward fuselage fits snugly into slots in the rear fuselage, followed by the front of the engine intakes. These were a tight fit but eventually snapped into place. After adding the twin vertical stabilizers, I added the horizontal stabilizers. These can be posed level or canted down in the front.

Once the few seams along the top and bottom rear fuselage join were cleaned up, I painted the aircraft body in Mr. Color light gray. I followed this up with a good coat of Gunze’s Mr. Super Clear Gloss. Then I spent the next few days adding lots and lots of stencil decals. The decals themselves are superb. They release from the backing sheet quickly, are nice and thin, but resist folding up on themselves. They conform to surface detail well, even without using a setting solution. The decal sheet doesn’t name the printer, but these are as nice as any sheet I’ve seen. Once all of the decals were dried, I covered everything with Alclad Matte Klear Kote. The missiles are all molded, via slide molding, as a single piece. Some cleanup was needed along the mold lines. These were painted, gloss coated, decaled and matt coated along the same lines as the aircraft itself.

The last steps were adding the landing gear, gear doors, and canopies. The metal gear is a nice addition. The wheels and tires are molded separately, making painting them simple. The instructions are also a little vague here as well, but after test fitting everything, all of the pieces went into place. Once on its wheels, the Foxhound is a menacing looking aircraft. The clear parts come as regular clear, and in a smoke gray. There is nothing in the instruction to clarify which to use. I chose the smoke colored version as it is unique. After masking and painting these, I added the very thin light red trim decals around the frames.

Overall this is a really, really nice kit. Everything fits together well, the detail is superb, and the decals are fantastic. I really enjoyed building this model and I’ll be sure to pick up another AMK kit in the future.

Thanks to AMK and IPMS for the opportunity to review this wonderful kit.