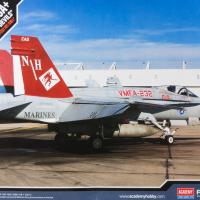 Academy has a quality line of 1/72 scale aircraft, and they have recently begun to release several reboxings of these kits with special decals. Their latest special edition covers a USMC F/A-18A+ Hornet from VFMA-232, the Red Devils. The F/A-18A+ Hornet is an A-model that has had an avionics upgrade, primarily consisting of the addition of the AN/APG-73 radar. For the front-line Marine aircraft, so-called “bird slicer” IFF antennas are also found on nose of the A+, forward of the cockpit. Beyond the A+ parts, A-model Hornets also feature prominent reinforcement plates along the inside of each vertical stabilizer.

Academy’s initial 1/72 scale Hornet release debuted in early 2008, depicting an F/A-18C. This was quickly followed by an F/A-18A kit, which consisted of the complete C-model kit plus a small sprue featuring the A-model tail and re-enforcement plates, along with an alternate center pylon. This Red Devils A+ release is identical to this first A-model release, with the exception of the new decal sheet.

The Red Devils kit provides markings for a single jet, BuNo #162396, assigned to VMFA-232 in 2007 during a Persian Gulf deployment aboard USS Nimitz. This colorful CAG bird features bright red lettering, provided as decals, and red vertical stabilizers that will need to be painted by the modeler. The decal sheet is printed by Cartograf and includes an array of small stencils for the Hornet and its stores. Carrier film on the larger decals is minimal, while a couple of stencil groups are linked with larger amounts of film to ensure accurate placement. The white insignias that will be placed on the red tails appear to be plenty thick and should prevent color bleed through. White decals are provided for the rudders, but it will likely be easier to mask and paint the rudders rather than trying to fit the decals.

The kit itself arrives on five gray sprues and one clear sprue. The parts have fine recessed panel lines and crisp details. There is no flash to be found anywhere. Construction follows a 16-step manual, with the decal placement guide found on a separate sheet. The cockpit is assembled first, featuring subtle raised details on the instrument panels, backed up with decals, and a basic ejection seat. The assembly moves onto what is perhaps the trickiest part of the build: the four-piece nose. My past experience with the Academy Hornet has shown me that a great deal of care must be taken to correctly align these nose pieces to avoid steps and the need to fill and sand. The remainder of the fuselage assembly is easy by comparison.

While the Hornet has a great deal of detail, you will find some areas that could be improved by the industrious modeler. The intake trunking is very shallow, only about a third of an inch deep, which seems acceptable for 1/72 scale in general. The wings are one-piece affairs with the flaps and slats molded up, unlike how the typical at-rest Hornet appears. The flaps look to be an easy part to reposition with a bit of cutting, while the leading edge slats will require a great deal of surgery to move. Finally, the kit’s canopy has a nicely molded omega shape, but the three-part mold leaves a seam along the center that will need to be sanded out.

Beyond the small quibbles I’ve outlined, I’ve always been very impressed with Academy’s effort on their 1/72 scale Hornet. In many ways, I find it superior to Hasegawa’s own effort, often considered the top F-18 in the scale. The various vents and grills that are molded onto Academy’s body are ideal for receiving a detailing wash, and sharper than those found on Hasegawa’s Hornet. Similarly, the Academy wheel wells feature some very nice basic detailing, a step above Hasegawa’s. Finally, Academy includes four GBU-12 bombs and two additional electronics pods along with the drop tanks, AIM-7 and AIM-9 missiles, and FLIR pod found in both kits.

It’s an easy task to recommend Academy’s 1/72 scale VMFA-232 Red Devils boxing of their F/A-18+ Hornet. The striking Cartograf decals for a combat-deployed USMC jet are a great selling point for the kit. Even more so, this boxing can be built as either an A-model or C-model. Although a bit of care needs to be taken in assembly, Academy’s Hornet shouldn’t be overlooked. It’s also an ideal addition to your stash; there certainly is no shortage of Hornets in interesting schemes to be built!