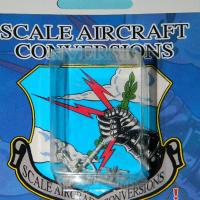 IPMS/USA thanks Ross and his Team at SAC for supporting the IPMS USA reviewer corps with one more of many monthly releases, with another great landing gear addition for the modeling community.

This review is for the SAC landing gear released for the new Airfix/Hornby 1/48 P-51D. This kit was heralded as the “Ultimate” 1/48 P-51D. After the Meng kit, I wondered… it is a high-class act as well. But having built one Airfix pony now, I agree. Best game out there in my opinion. The shape is spot on, canopies are thin with three different versions of the kit, and the detail is just “There”. The wing has the puttied look to it, without rivets, and overall it sits like a pony. Various other panels like the carburetor vents are separate, and there is one more really cool feature; the lower fuselage scoop has both ducts to both radiators, both oil cooler, and Glycol, and YOU CAN SEE THEM if you look in the actual aircraft. Same for Airfix; look in and both radiators are there. A minor point to some, but it is there… and you get a separate fin, dorsal fillet in place, with tail section, which I haven’t figured out yet, but will later no doubt when I play the “Put them on it and see“ game on the next kit.

On to SAC gear rave: The kit landing gear itself is faultless in that you don’t end up with the “Stiff-leg” look when you put the kit on its wheels, as so many modelers see to miss… the gear axles are just ahead of the leading edge, leading to a stable taildragger condition that won’t readily nose over without pilot inexperience or poor power management, and the gear doors have standoffs that are separate items, for which there is a simplified block in the Meng company kit. Airfix plastic, however, can be a bit softer than Mengs, which I find almost ideal to work with. However the harder plastic is more brittle on Meng kits, In this case, BOTH gear legs snapped off at the fork radius on me before I even got it on its wheels. The Airfix plastic would not have survived the hit either (I had a magazine slide off on it while it was on the bench, right as the kit was ready to finish) so the metal gear would have made a difference.

As to the Meng kit, there is no SAC gear (yet)… and Ross, knowing him, would probably have his team scratch out a set of main gear door leg standoffs to replace the missing items in the kit gear, while at the same time modifying the kit gear leg to accept the upgrade. However, to date, there is no 1/48 gear for the Meng kit, only the Airfix version. That suits me fine, I’ve stashed four in anticipation of holding a rodeo.

Take the SAC gear, and replace the kit parts with the SAC parts. You HAVE to install the tail gear during assembly, but that’s ok because it’s strong enough to take my imposition of bench rash.

Once again, SAC landing gear is a welcome addition to the Airfix Mustang… well worth the investment and time wasted if you break the gear off and have to replace it. My new motto: Avoid frustration, buy SAC gear.