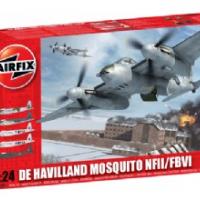 My apologies to Airfix for this kit having to take a back seat to life for a little while, but I am in the home stretch now.

With the basic airframe completed, it is now time to start adding some of the minor sub-assemblies. Up front, the machine gun bay was added. The detail in here is fair – like the engine bays, a lot more pipework and wiring would need to be added to be thoroughly convincing, but it looks OK when done out of the box. The machine guns themselves are somewhat lacking in detail, and the addition of Master Models gun barrels really helps – see my separate review elsewhere on this website. Assembly is a little fiddly and care needs to be taken to correctly align all the parts – any deviation from what is needed will result in some awkward moments getting the nose cap fitted – ask me how I know… I was displeased with the way Airfix chose to tackle the belt feeds, as these are cast in rubber and the way they bend is awkward and you’ll need to take care to prevent them looking quite unrealistic.

Having completed the machine gun bay, I turned to the cannon bay. This was even more awkward to get correct, but fitting the barrels through their housings helps get everything aligned quite well. Detail is pretty good, and it all looks quite convincing when it’s done.

The propellers feature separate blades and there is a choice of either the early pointed or later paddle blades, depending on the role and period. Check your references. My airframe required the paddle blades and these have a good shape and are not too thick. The fit to the hubs is a little loose, pitch-wise, but it is easy to adjust all the blades to the same pitch.

With one engine exposed and the other to be covered up, I had to fit one set of cowlings, and these are a bit disappointing with the fit far from perfect. Some sanding was required. Even then I was left with a gap that needs a strip of plastic card to fill it. Evidently, you are not really supposed to use them.

Back to the cockpit area, I added the radio sets behind the seats, the gunsight in front of the pilot, and some paper belts to the crew seats, all prior to adding the canopy. The crew entry door is a separate assembly and was gussied up so I opted to have it open with the ladder displayed down.

The Mosquito canopy had both internal and external framing, and Airfix have elected to offer the internal set as a separate piece. This is quite complex and very finely molded – take care when removing it from the heavy sprue gates. This fits neatly inside the large clear canopy. This is molded in almost one piece, aside from the optional observer’s side windows, and is quite thin and clear with no visible flaws, though one of my side windows had a slight stress fracture. With a coat of Future, it fairly shines and is perfect for showing off the interior.

With something like a complete model on my hands, it was time to start thinking about painting the beast. Please refer to my review, somewhere on this website, of Aviaeology’s new 1/24 sheets for the Mosquito; I decided to use one of the options on sheet 24011 depicting an aircraft from 404 Squadron, a Canadian strike unit. This calls for an unusual scheme, based on the standard night intruder aircraft scheme of overall Medium Sea Grey with a disruptive pattern of Dark Green. The standard coastal strike fighter scheme was Extra Dark Sea Grey (EDSG) over Sky, but 404 Sqn, although a Coastal Command squadron, received their aircraft in the standard, factory-applied, intruder scheme. It appears that rather than paint the full coastal scheme on their aircraft, the squadron over-painted the topsides of at least a couple of aircraft with a thin coat of Extra Dark Sea Grey, which allows the previous Dark Green camouflage to show through slightly. The appearance is quite strikingly different to the standard coastal scheme and I like the effect.

The first step was to coat the undersides with MSG, and this was done after some careful masking of the undercarriage, cockpit and weapons bay. Next, I sprayed the topsides with a coat of lightened EDSG. This was allowed to dry before masks were applied for the darker areas that indicated the former Dark Green disruptive pattern. The model was then overcoated with straight EDSG.

With the paint on, I applied the decals, using both Aviaeology main markings and some Airfix stenciling. The Airfix decals are printed by Cartograf and are excellent – while they look very matt on the sheet, they settle down very well with a minimum of silvering. Beware that they are very thin and this caused me a little heartburn!

The Aviaeology decals were generally nice to work with, though they had a tendency to stay put, so make sure that you get them in the right place the first time; they are also very thin and I had a couple of them break when I tried to adjust their position. Color density is great and they are perfectly in register, and I’d rate them as some of the finest decals I’ve had the pleasure of working with.

A word of warning; this is a very large model and it was very awkward to get this one painted within the confines of my spray booth. Just handling the model to get some of the smaller parts in place was also slightly hair-raising, as I swung the model this way and that to get parts in the right place. A third hand would have been very handy…

It was time for the final “fiddly bits” and these often proved to be just that…Both the bomb bay and undercarriage bay doors are fixed in place using scale hinges, and these are very awkward to get in place, and their positioning is not helped by the fact that the pegs on the hinges are slightly too big for the receiving holes in the aircraft structure – you’ll wish to sand them down a bit to get them to slot into place without possible grief.

The selection of underwing stores would be fine if there weren’t problems. Firstly, the drop tanks included are too long and skinny, and major use of filler to reshape the front end is necessary if you are going to use them. I did one, and don’t think it looks particularly good, so I opted to not use them – strike Mossies were often seen without them while on the ground of course. The rockets provided are also pretty poor. Not only are the fins way to thick, but the shape of the heads is incorrect. The rails are quite nice, but beware of the spacing of the mounts, as they are different depending on how far out on the wing they are. The Aviaeology decals provide plans for scratch-building a set of the unique rails used by the Canadian squadrons and I will do that at some point. The 500lb bombs for inclusion in the bomb bay and/or under the wings have a good shape, but again the fins are too thick, as is the tail ring.

A further word of warning: the undercarriage is molded with scale fidelity, and this proved problematic for a klutz like me, as the sheering strength is quite low. I ended up knocking off the lower part of the starboard main undercarriage twice, and it was a very fiddly and less than stellar fix. I have contemplated buying the white metal replacement by Scale Aircraft Conversions, should I have to attempt further repairs, and you might wish to consider this course before you build…

So now the model is complete and very impressive it is. It is very large and quite weighty, and I have no idea where this is going to be displayed in my house! Overall, the accuracy is good, though the fidelity of some of the parts is not up to snuff, and I have mentioned some minor niggles; nothing though that cannot be corrected or worked around. The level of detail is fair considering the scale; I’d expect this level at, say, the 1/32 level, or a very high end 1/48 model, but is a bit lacking in places, I feel, for a 1/24. Having said that, the cost of going all out on the detail might have put the cost of this model beyond anyone’s reach, let alone the pockets of most, and to be fair to Airfix, scratch-building extra detail (particularly in this scale), or acquiring aftermarket parts, are two options for the committed super-detailer. Expanding on this, I feel the kit is good value – it’s taken me 5 months to get the beasty together – considering the many, many hours of work I’ve put into the model. It’s a kit I can recommend, with reservations about its size.

Airfix are to be congratulated on their choice of subject, and for their courage in releasing such a large model. I hope that they will think about releasing other large scale kits of this kind in the future, though perhaps not quite so large – a Fairey Firefly, for example, would be very nice….

A thank-you to Airfix and IPMS for this review sample.

Completed model from starboard side