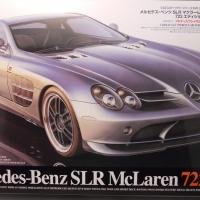 Subject:The Mercedes-Benz SLR McLaren was a supercar designed to compete with the world’s greatest sports cars, such as Ferrari and Porsche. The SLR series, which means "Sport, Leicht, Rennsport" (sport, light, racing) was first designed by M-B in the 1950’s. This modern version was a joint project between M-B and McLaren Automotive, the championship racing team who used M-B engines in their Formula One Grand Prix race cars. Like many other recent retro style cars, many design elements were classic vintage Mercedes trademarks, such as the long front hood and the gull-wing doors hinged at the top. The new SLR was launched in 2003. This 722 Special Edition, of which only 150 were to be built, was launched in 2006. The differences were a more powerful engine, new front splitter, different wheels and unique badging. Only 150 were produced, all silver. The name honors the famous M-B race victory in 1955, at the Mille-Miglia 1,000 mile open road race across Italy. Driver Sterling Moss won the grueling race, in car #722, which was also the time the car left the starting line.

Kit: Tamiya issued a kit of the “base” SLR in 2006; this is a modified reissue that includes the unique 722 components. The packaging is usual Tamiya high quality, each sprue comes individually wrapped in a plastic bag. The kit is molded in grey, black, and clear plastic with two sprues of chromed parts. Also included are rubber tires and a metal base plate.

Body: The gull wing style doors are one of the most distinctive features of this car, so the body is a multi piece assembly to capture that. The doors feature a metal hinge. The new splitter design on the real thing is carbon fiber, but there are no carbon fiber decals in the kit, so you would need to use an aftermarket sheet if you want that look.

Engine:The engine is a three piece assembly. This is sufficient since the chassis is a large plate that hides the engine.

Chassis: The kit features suspension detail also pose-able front wheels. Like several other Tamiya kits there is a painted metal base plate. The new style wheels are chrome plated; on the real thing they have black spokes with a chrome ring.

Interior:Same as on the first SLR release, it builds up off the chassis, separate dash and rear panels, door panels attach to the opening doors actual car with a little detail painting.

Build: Being a Tamiya kit, the build went smoothly with one major exception. The gull wing style doors are one of the most distinctive features of this car, so the body is a multi piece assembly to capture that. The doors feature a metal hinge. Along with a plastic hinge, but the metal piece keeps falling out, and the doors need to have a metal rod in order to be propped open for display. Also, I had a hard time getting the doors to line up properly when closed. The door is a multi piece assembly, including clear plastic for the glass, so maybe I was just a bit off. If I had not been doing a box stock review for IPMS I would have glued them shut and been done with it.

Otherwise, everything went together well. The chassis and suspension fit well and it sits level when done. The hood swings out and up to open but this went together fine. The engine is only three large pieces but looks ok with detail painting. Since most of the real thing is covered by the shroud, which is a piece with a lot of very nice detail molding in this kit, and the bottom is hidden by the chassis, there is enough detail here to capture the look of the real thing with a little detail painting.

For paint I went with a different scheme than the real 722 version, all of which were silver. I used Testors White Lightning lacquer shot from a rattle can with a clear coat. I felt the chrome wheels featured some beautiful plating which would be a shame to strip off, so I left it. It goes well with the pearly white paint finish. I added red accents to the interior, this too differs from the actual 722 which was all black but I like to add some accents to break out the black hole effort caused by painting it all black.

In summary, other than the doors I was pleased with the kit. The finished build looks good. If you like Tamiya sports/exotics you will not be disappointed.

Our thanks to TamiyaUSA for the review kit.