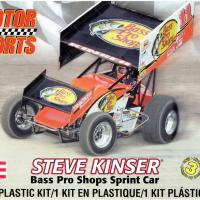 Some of the most exciting racing can be found with American Sprint Cars. The series may also be called “The World of Outlaws”. These cars feature a high power-to-weight ratio and huge wings. These small cars race around dirt tracks and thrill crowds around the country. Steve Kinser has been one of the biggest stars in this series with over 550 “A” feature wins and 20 championships during his career.

This kit features the 2011 series markings of Steve’s car which was sponsored by Bass Pro Shops. This car features an eye-catching scheme of black, white, and a florescent red. Steve’s car owner is Tony Stewart.

It appears that this kit has been around for quite a while. It has been issued with other markings of Steve Kinser, and it looks like it has been issued as a Monogram kit and also as a Revell/Monogram kit. It is possible that the model has been modified over the years to reflect changes in the car design. In any case, the parts seemed to be in good shape without much flash, although the mold parting lines did show a little too much. This is more apparent with the chrome plated parts.

It contains over ninety parts, including two chrome plated sprues. Each sprue is well protected with a plastic bag, and no damage was found on any of the parts. The kit includes an eight-part, reasonable looking driver. A large decal sheet is provided which includes the large Bass Pro Shop markings and the myriad of small sponsor stickers, as well as the decorations on the driver’s suit. The car body parts are mostly painted in the florescent red color, and the white parts of the color scheme are provided by the decals. To my eye, the white areas seem to be slightly transparent, but this does not show up in the photos. Four vinyl tires are provided which look very realistic. A sixteen-page instruction sheet is provided. The general location of most of the parts is clearly shown, although I had a few problems finding the exact mounting points.

The build starts with the tubular frame – just like the real car. This consisted of only two parts. This had to be more difficult to mold but provided a great, accurate base for the assembly of the model. The engine consists of seventeen parts and looks good, although it is mostly hidden. My biggest problem was with the various chrome-plated steering, axle, suspension, nerf bars, and the rear push bar parts. I had problems trying to scrape the chrome and the paint off the parts so they could be assembled. In some cases, the attachment areas could not be easily located and I had to use super glue and accelerator. The biggest problem was with the push bar, which is the cage around the rear of the car. First, this part is molded flatter then the final shape. The modeler has to bend the part to make it fit. Second, this part had more flash than any other part. Finally, the directions and the parts did not do a good job of showing how the part attaches to the tubular frame. It took several tries with glue being smeared around to get the parts together. I ended up using a piece of tape to hold the bar in place while the glue was accelerated. I did not build the driver because he is mostly hidden and would cover up some of the great detail.

Overall, I am pleased with the look of this model. It is not for beginners but can be readily assembled by most modelers with some experience, and noting the comments above. The color and markings of this famous car, along with the impressive looking wing, make it jump out from the crowd. It is well recommended.

I would like to thank Revell for bringing this unique model back with the dynamic-looking Bass Pro Shops markings. Also, thanks to IPMS/USA for letting me have this interesting review.