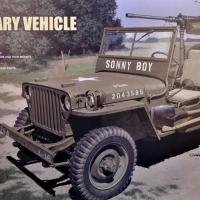 The develop of the iconic Jeep in 1940 lead to the production version known as the Willys MB Military Vehicle. Over 640,000 vehicles were produced by Willys and Ford during World War II. Meng’s new tooled kit follows their flame thrower version released a few months ago.

The kit consists of three sprues of tan plastic, one sprue of clear parts and the Jeep’s body. There is no photo-etch parts and a small decal sheet for three different jeeps. One of the sprues is the 50-caliber machine gun and this is dated 2014. The other sprues are dates 2019. The 50-caliber machine gun receiver is molded separately and has a hollow barrel guard. There are three choices of barrel assemblies included. This is the best machine gun I have seen in 1/35 scale. The other two plastic sprues have a little flash on the smaller parts. It is easy to remove but takes some care. The instruction booklet is 20 pages long and consists of 22 steps, three color paint/decal plates and a sprue layout. In each step, the parts that being added are in a tan color, whereas the already built parts are in gray. Some of the final color is on these tan parts to assist in painting.

Construction starts with a full engine build up followed by a full suspension. There is some small, thin flash on a few of these parts, mainly in the smaller details. Steps four and five would have you build the suspension off the frame then attached it in step six. I found it much easier to get the leaf springs lined up correctly with their frame mounting points by building up the suspension on the frame. I basically combined these three steps into one. In step three it calls out to fill in a hole and cut off two mounting points on the rear bottom of the frame. I found that these will never be seen, so I skipped this. The tail pipe does need to be drilled out since it is not slid molded. More flash around the edge of the hood needs to be removed. You can add a hinge to position the hood open if you want to show off the detailed engine compartment. There are a could knock out pin marks on the bottom of the body and frame that need to be removed if you are going to detail the underside of this jeep.

On the rear tailgate, the instructions again tell you to fill in molded-in holes and mounting points, but they will not be visible after installing the spare tire and fuel can. I once again skipped this step. The jeep’s body sat a little proud of the frame. I had to wedge it hard on the rear to get the tailgate to pop into place. I then clamped and glued it. The five tires come as two pieces but glue up well together so the seam is easily removed. I left these off for painting and installed at the very end. The windshield is a thick clear part and mine had two scratches in the driver’s side. A couple coats of Future helped to hide these. The interior windshield wiper detail and windshield frame is molded in this clear part. I wish Meng would have made these parts separate to save the masking of both sides of the windshield. The windshield assembly can be installed in the down position on the hood. The instructions do not show this, but the windshield is on a pivot hinge to allow that.

The interior is fully detailed with decals for all the gauges and data plates on the dashboard. I left the steering wheel off until the end to allow better access to the gauges. There is a frame for a canvas top that is in the stowed position. This comes as three pieces, so make sure to line with the cross members since they were one piece on the real vehicle. The fuel can on the rear has a molded on round pack of some kind. I wish Meng would have molded these separately since this part does not look good. The last steps deal with assembling either the 30-caliber or 50-caliber machine gun. I choose the 50 because it is the best 50 I have seen in his scale. I was missing part B10, the ammo box holder for the side of the machine gun. It was broken off the sprue, but I did not notice this when I started construction, so I do not know if it came like this. I did contact Meng and they replied that I could by this whole sprue when this kit goes into production.

I painted this kit using Tamiya olive brad and khaki paints mixed about 50/50. The decals are very thin and laid down great with just a couple applications of a setting solution. I was worried about the hood star having silvering between the star and roundlet, but it looks great.

I would like to thank Meng and IPMS for the opportunity to build this fun little kit.

Finished- Gun and Passenger Side