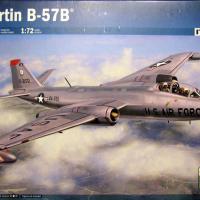 Created to replace the piston-engined B-26 Invader, the twin jet engine tactical bomber B-57 Canberra was produced by US aircraft company Martin in the 1950s. Derived from the British aircraft EE Canberra it was produced in several versions to perform not only bombing but recon, electronic warfare, ground attack and dive bombing duties. The B-57B, developed for bombing missions, was the main version produced. It was characterized by the adoption of a new cockpit with two crew members arranged in tandem and under-wing hardpoints able to be armed with a wide range of weapons. The first units produced were armed with eight 12.7mm machine guns installed within the wings and later substituted with four 20mm cannons.

Originally released in 1985, it has been re-boxed at least 7 different times, and is still a pretty nice kit. Inside the box are: 2 sprues of light grey, 1 of clear plastic, and a nice decal sheet. The plastic is molded crisply with just a little flash and few sink marks, but there are a few pin marks to clean up. The clear parts are nice, and the decals a printed cleanly and in register.

It starts with the 12 piece and 7 decal cockpit and forward wheel bay. The pit is basic, but looks the part, and the 3 piece seats have molded-on belts with a decal for them also. Yes, it could use more detail, and Pavla does a resin pit for this kit, but out-of-box looks OK to me. Once the pit is together, you can assemble the fuselage halves, but do not forget to add the nose weight. The instructions call for 20 grams, but this was not enough, and I ended up adding more later. The instructions also would have you add the canopy and support at this time, but since I wanted to pose it open it was left off until much later, as were the speed brakes, so as not to break them off during the build.

Next up are the wings, and you must drill the holes for the pylons. You have the option to cut the flaps to pose them open. Once assembled you can attach them to the fuselage, and for me the fit was very good, and no filler was needed. At this point you can add the bomb bay doors, or if you like, the bombs, as you can pose the rotatable bomb bay open. It was at this point that I decided to decal the underside, as it would be impossible to do so after the pylons were added. Once this was done, the final bits and pieces were placed on the aircraft (pitot tube, antenna, wing tanks, lights, landing gear, canopy and speed brakes). There no real fit problems with this kit, and assembly fairly easy.

I used Tamiya Semi-Gloss Black (X-18) to paint this kit. You are given 4 marking options for this aircraft:

The decal film is a bit thick, and I was worried a little, BUT they went on easily and settled down nicely with a little Micro-Set to help.

The Italeri B-57B is still a good kit after all these years, and I can recommend this kit to all modelers.

I would like to thank Italeri & Hobbico for this kit, the review corps for letting me build it, and all of you for reading this. Model on!!

Front of aircraft, head on

Left-rear, above
Previous Next