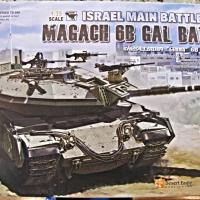 Meng exploded on the scene several years ago and continue to produce very high-quality kits of a variety of subjects. This kit focuses on the Israeli modified M-60 Battle Tank known as the Magach 6B. M-60s began service with the Israeli Army with the 1973 Yom Kippur War and most of the armored force was equipped with M-60 A1 and later models. The Israelis continued to upgrade their fleet to meet the changing threats on the battlefield. These vehicles have the low profile commander’s cupola, an upgraded engine, and armor package as well as an upgraded fire control system. Academy has provided kits of the Magach 6B and 7C, so it will be interesting to see which direction Meng takes with this kit.

The kit has 813 parts cast in light brown plastic. There are four separate sprues for individual track links and pins and three additional sets of sprues. The hull and turret are packaged separately. There’s one sprue of what appears to be vinyl with the mantlet and barrel cover, a PE fret, wire, and clear parts. The parts have no flash, but I did notice that the arms that the road wheels attach to have sinkholes. There are decals for two vehicles, both from 1998 and profiles that are in full color. The paint callouts are for AK interactive. If you use alternative brands, it should be easy enough to figure out alternatives. I used Vallejo and Tamiya paints.

As with most tanks, assembly begins with the lower hull and the suspension. The instructions are clear and easy to follow. The primary road wheels come in two components, the wheel hub and the outside rubber covering, allowing for easier painting. The exterior bumpers and various covers are well detailed. Many Meng tanks have a flexible suspension. Rather than using hard connection points for suspension points, Meng replicated the flexibility of torsion bars with plastic. This feature allows for a great deal of flexibility if you are building a diorama. It also creates some challenges. The connection points between the suspension arms and the torsion bars are robust, but in my past experience, once you put on the road wheels, which often takes a great deal of pressure, the arms can break from the torsion bars. Something to watch for. Pay close attention to the instructions when assembling and installing the torsion bars. They are different on the left and right sides. There is a great deal of free play in the bars, so when it came time to install the shock absorbers, the rods barely fit into the main body of the unit.

Once the running gear is complete, the instructions direct you to move on the upper hull. The assembly of the tracks is in a later step. The upper hull goes together quickly. There are not any issues. The various pieces of ERA go on the glacis plate without any issues. Unfortunately, the carpet monster ate some of the smaller pieces that are attached to the hull.

The tracks are disappointing and very fiddly. They are molded as individual links. Meng thoughtfully includes a jig with the clear parts to assist in assembling the track runs. The tracks were designed to be flexible with a series of pins. You put up to five links in the jig (one side of the track snaps together) and then insert pins into the holes and they should be secure. The pins are very small and, in my mind, on the fragile side. As you assemble the runs, you can then attach them together into a length of track. In a previous Meng kit, this system was used and the track pins held and did not break. In this kit, the pins broke and did not hold the links together. Suffice to say, this step of the process was extremely frustrating. I found that I had better luck assembling two or three links at a time and not using the jig. The pins held, for the most part. Given my extreme frustration, since this kit has armor skirts and hides the upper track run, I chose not to assemble the portion of the track hidden by the skirt. A prudent decision.

The turret goes together without any issues. The barrel is not slide modeled, but given the thermal shroud over the barrel, it cleans up well. The exterior applique armor for the turret is well engineered and fits over the M-60 turret without any issues. The bustle basket floor in PE and the basket itself is plastic. I found the joints far too fragile. After some work, I was able to get some positive contact. The turret is supposed to have two cables, going across the turret bustle. It took a great deal of effort to build one. I chose to keep the other off. The tank has three machine guns. Like the turret bustle, the machine guns are well molded but very fiddly. Careful with the mounts. They contain many small pieces.

After priming the model in Tamiya’s NATO Black, I the main color is Vallejo Sinai Grey which appears to be a good match to the photographs that I have seen and the color profiles. After coating it with Future, I applied the decals. They went on without any trouble. I have been a fan of Meng kits since they exploded on the scene several years ago. I enjoy their tanks, they are well engineered and go together relatively well. They perhaps have a tendency to veer towards being over-engineered and perhaps are not for a novice modeler, but when finished they are nice kits. The one element that needs more attention is the tracks. The individual links are well molded. Unfortunately, the plastic pins do not create enough friction between the links to hold them in place and keep them mobile. I am not an engineer, so whether the pins need to either larger or longer or the holes in the links smaller, is not my concern. Something needs to be done. That being said, Meng is one of my favorite companies. They have made great progress in terms of their subject matter and how they engineer kits. The M-60 is a great addition to the growing fleet of vehicles produced by Meng.

My thanks to IPMS, and Meng for giving me the opportunity to review this kit.