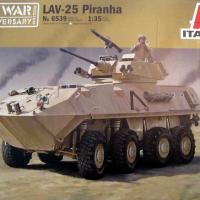 This kit by Italeri is a new release for 2016. The LAV-25 was developed in the 1980’s in response to the LAV program which was started during the late 1970’s. After several companies submitted their plans, General Motors of Canada was selected as the manufacturer for the Army and the Marine Corp. Later the Army withdrew their plans due to funding issues. The Marine Corp continued and eventually six variants of the LAV-25 were procured. This kit represents one of those variants: The LAV-25 with the 25mm M242 Bushmaster Automatic cannon. The LAV-25 I will be constructing represents the vehicle named “Croaker” from Charlie Company, 2nd LAI Battalion during Operation Desert Storm as seen in D'Angina, James, and Henry Morshead. LAV-25: The Marine Corps' Light Armored Vehicle. Botley, Oxford: Osprey, 2011. Print. Decals are provided for this version in the kit.

Let me preface my review by stating that as modelers we do not always follow the instructions step by step. We tend to skip around completing steps in advance while letting previous steps dry or bond. For this build and review, I did indeed skip steps, but I will describe what I found in each step, pros or cons, so the builder will be enlightened as to what needs addressed during the build.

The box is a normal size 12-1/2” long x 9-1/2” wide x 2-1/4” tall with great graphics of the LAV-25 Piranha in action on a desert background. Contained within the box are three sprues all contained in a plastic bag and a small decal sheet for three different versions of the vehicle. The kit contains 207 parts estimated per ItaliaUSA’s website on three dark yellow sprues lettered A, B and C and a large seven-page fold out instructional manual.

Upon opening any model kit, what I like to look for is the amount of work, such mold relief tapers, flashing, ejector pin release points (recessed or elevated marks), mold shift points, sprue attachment points and mold seams that need to be addressed during construction. The plastic Italeri used for this kit seems to be very brittle. So when parts are cut from the sprues be extra careful. The parts have crisp detail with some flash. Upon inspection of the sprues some slight flash was seen, but not much. A few pin release points were seen which will have to be sanded or filled. The 25mm M242 Bushmaster main gun barrel is moulded in one piece with seam lines running down the middle which should be easily removed. There are no additional parts on the sprues that are not used. So BYE-BYE to extra stash parts.

The instruction manual is printed in black and white measuring approximately 13“tall x 7-3/4“ wide in portrait orientation. It contains ten steps on seven pages of clear uncluttered diagrams printed in black and white. The images for the steps also contain the paint color reference to be used. There is plenty of room for notations prior to or during the building stage on the sheet. The paint colors to be used are provided by Italeri in their reference number but, Federal Standard numbers are also listed for referencing other paint manufacturers. Italeri provides in the instruction manual three different versions of the LAV-25 with three different paint patterns and decals. All are described as: U.S.M.C., unknown unit, Saudi Arabia 1991 even though there are markings available for the “Croaker” in Charlie Company Operation Desert Storm, markings for “Steel Justice” of Delta Company in Operation Desert Shield and markings for “Known Distance” of C Company Operation Desert Storm.

In conclusion, this was an enjoyable build. At times frustrating because of all the mold seams. However, the detail was very good. As to accuracy I cannot say, but from pictures and references the accuracy seems to be spot on. The kit doesn’t allow for the front four wheels to articulate which would have been a good option. However, this modification could be scratch built using reference pictures as a guide. The kit also doesn’t supply the wire cutters normally mounted on the turret and hull but, as before these could be easily scratch built. As with most models, there are several aftermarket accessories available one could add to this kit. Finally, the call out numbers for Italeri Paints and the FS numbers were a welcome addition. I highly recommend this kit.

Thanks to IPMS/USA, Italeri and Hobbico for allowing me to review this kit.