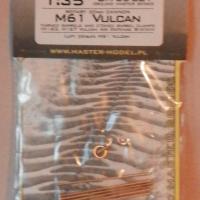 At the end of WWII, The United States Army began to consider new directions for future Military Aircraft guns. The higher speeds of jet powered aircraft meant that achieving an effective number of hits would be extremely difficult without a much higher volume of fire. While captured German designs (principally the Mauser MG 213C) showed the potential of the single-barrel revolver cannon, the practical rate of fire of such a design was still limited by ammunition feed and barrel wear concerns. The Army wanted something better, combining extremely high rate of fire with exceptional reliability.

In response to this requirement, the Armament Division of General Electric resurrected an old idea: the multi-barrel Gatling gun. The original Gatling gun had fallen out of favor because of the need for an external power source to rotate the barrel assembly, but the new generation of turbojet-powered fighters offered sufficient electric power to operate the gun, and the electric operation offered reliability superior to a gas powered weapon.

With multiple barrels, the rate of fire per barrel could be lower than a single-barrel revolver cannon while still giving a superior total rate of fire. The idea of powering a Gatling gun from an external electric power source was not a novel idea at the end of the World War II era, as Richard Gatling himself had done just that in 1893, with a patent he filed.

The Army issued General Electric the contract in 1946 for "Project Vulcan", a six-barrel weapon capable of firing 7,200 rounds per minute (rpm). Although European designers were moving towards heavier 30 mm weapons for better hitting power, the U.S. initially concentrated on a powerful 15-millimetre (0.60 in) cartridge designed for a pre-war anti-tank rifle, expecting that the cartridge's high muzzle velocity would be beneficial for improving hit ratios on high speed targets.

The first GE prototypes of the 15-millimetre (0.60 in) caliber T45 were ground-fired in 1949; it achieved 2,500 rpm, which was increased to 4,000 rpm by 1950. By the early 1950s, the USAF decided that high velocity alone might not be sufficient to ensure target destruction and tested 20 mm and 27 mm alternatives based on the 15-millimetre (0.60 in) caliber cartridge. These variants of the T45 were known as the T171 and T150 respectively, and were first tested in 1952. Eventually, the 20×102 mm cartridge was determined to have the desired balance of projectile and explosive weight and muzzle velocity.

The development of the F-104 Starfighter revealed that the T171 Vulcan (later redesignated M61) suffered problems with its kinked ammo, being prone to misfeeding and presenting a FOD hazard with discarded links. A linkless ammunition feed system was developed for the upgraded M61A1, which subsequently became the standard cannon armament of U.S. fighters.

If you want to model the M163 VADS system in 1/35 scale, you are still sorely limited. Academy and Italeri are the only plastic models on the market. To my knowledge, both are Out of Production. However, they can both still be found in the second hand arena with the Academy offering being easier to find. In my opinion, it is the only way to start. Verlinden makes two aftermarket resin sets for this machine. One is American and the other IDF. Actually it would be IAF as the Air Force controls the Air Defense Service. Hobby Fan makes the ultimate and most expensive conversion allowing you to use any base M113. They recommend Tamiya but you get the full interior and turret. It is absolutely gorgeous and well worth the money.

For those of us not wanting to give up our first born, Master Model has made an inexpensive, easy, and time saving conversion for your Vulcan.

You get the six barrels in turned brass, a brass ring, and a small brass sheet containing fifteen stamped circles of different designs. You really can’t get much simpler. Famous last words.

I started at the rear and glued all the barrels to the rear attachment plate. The barrels are all flush and I knew this would be a problem later on as the barrels eventually come to a point at the firing ends. It takes three pieces to assemble the collar. Two pieces of photo etch and the included brass ring. As you can see in the picture of the real barrels, this is not an accurate representation. The real collar appears to be a solid disk of metal. The builder may wish to attempt to fill and sand the collar to make it more accurate. The next collar up is also constructed from two pieces of PE and appears (on the real thing) to be a solid piece of metal as well. The final collar is made up of two pieces and this one does look the part when compared to the actual gun system.

I assembled the Academy Vulcan gun system. As you can see, there is a HUGE difference in overall looks and length. I did no measuring but on looks alone, the Master Model is far more impressive. The Academy is three pieces of two guns each. All require clean up and it does not come with the front barrel venting fins.

I would like to thank Master Model for releasing and providing this conversion for review. This is a nice addition to hop up at either of the plastic and all three of the resin kits if you so desire. Also thanks to IPMS/USA for allowing me to review it. Go out there and pick up one of these new barrel sets and make your Vulcan an impressive beast!

M-61 - The Real Thing
Previous Next