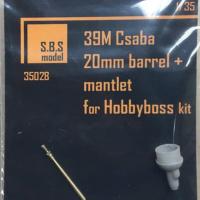 Nicholas Straussler, a Hungarian designer living in Britain between the world wars, designed several armoured cars for Britain. He was eventually able to come to an agreement with the Weiss Manfred factory of Csepel, Budapest to produce armored vehicles for use in his home country. The most popular design, the Csaba, named for Attila the Hun’s son, was based on the Alvis AC2 armored car.

After successful trials, the Hungarian Army ordered approximately 100 vehicles in 1940. About 20 of these were used in combat, with the remaining vehicles seeing service as command or reconnaissance vehicles.

The Csaba had a 20 mm cannon and an 8 mm machine gun fixed on a centrally mounted turret, a crew of three, and was powered by a 90hp 8 cylinder Ford engine.

HobbyBoss started producing a 1/35 kit of this somewhat rare vehicle in 2016. The kit is molded in plastic with the 20mm cannon coming as one part, with a separate plastic mantlet. Although, the kit provides a fairly nicely detailed version of the full 20mm cannon, no other interior details are provided, so only the inch of barrel showing outside the mantlet will be visible. The kit cannon has seven attachment points to the sprue, which will need to be trimmed and sanded, risking damage or loss of detail on the gun.

S.B.S. Models is a Hungarian model company producing resin and photo-etch upgrade kits for planes, AFVs, and other military vehicles in a variety of scales. This release in includes a metal gun barrel and new resin mantlet to replace and upgrade the HobbyBoss kit parts. The turned metal gun barrel is clean and sharp with excellent details, and the resin mantlet makes a great replacement to the plastic kit piece. These parts would make a nice upgrade to this kit at a very reasonable price.

I recommend these upgrade pieces to anyone building this kit. Thanks to SBS Models, and IPMS USA for this review product.