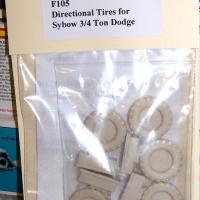 It’s funny how the small armor modeling world is often much interconnected. I was looking on the Missing-Lynx “Constructive Comments” site and saw Roy Chow’s, First Vice-President of AMPS (Armored Modeling Preservation Society), M3 Gun Truck. It looked different than your standard Dodge because it had these neat Deep tread directional tires. I contacted Roy and found out the tires were from Formations Models…..odd, they weren’t listed on the website! I contacted Rob at Formations and he said they were not a big seller and were taken off but as the molds were still good he would be happy to make me a set. I said make me two while you were going to be pouring.

The tires arrived and they are great. However, to use them, you have to destroy the AFV Club tires because the wheels have to be removed from the tires and then placed into the new ones. I figured I would start with the spare. I felt I did a pretty poor job. I went back to the internet and inquired about possibly changing out the Dodge tires with something off another vehicle. Due to bolt-hole patterns being so different, that was not going to happen. Luckily a fine young man named Steve Reid came to my rescue. Steve operates Celticwerks – Casting source. At the time, he didn’t have a website so I couldn’t check out his work. He saw my question and we emailed and he said he thought he could help me. He had the ability to machine the unwanted parts off the tires leaving beautiful rims that he then cast and could be simply popped into the Formations Wheels. Steve’s wheels are gorgeous. They simply pop in and you are ready to make your SkyBow or Italeri Beeps or Dodge ¾ Vehicles definitely stand out from the others.

I would like to thank Rob at Formations and Steve at Celticwerks for allowing me to have a different Beep. If they could meld minds and come up with a possibility of sharing molds it would definitely make matters so much easier for the modeler who wants a different wheeled Beep. Thanks to IPMS/USA for posting this review to allow fellow TreadHeads to know of a simple conversion available to hop-up there inventory. Have fun…build a Beep.

Combined Celticwerks wheels and rims with Formations tires
Previous Next