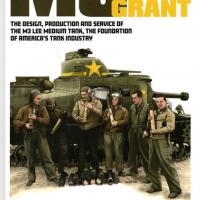 From the publisher’s notes on this book: “This volume is the most detailed study yet presented of the M3 Lee/Grant tanks, illustrating and describing the development, production, and use of these iconic vehicles by US, Commonwealth, and Russian forces during WWII. The tanks, their power plants, and production techniques used by each manufacturer are shown from assembly line to front line through this profusely illustrated book, including numerous never before published vintage photos.”

This book was a sheer enjoyment and a great pleasure to review, for several reasons. Speaking of photos, without attempting to count the actual photographs, there are at well over 1,000 black and white images in this book. Several portions of this book impressed me very much and I spent four days pouring over the photos and captions.

During the Acknowledgments to this book David Doyle states that he began collecting written and photographic records 20 years ago and in earnest almost five years ago, culminating in what he describes as only ‘modest results.’ From my reading and review of this large book, I can’t imagine what more any author can hope to find. While I have his prior paperback edition for the M3, this hardback book certainly puts that edition to shame.

In Chapter 2, there is great article about the person who immigrated to the United States from Denmark and eventually headed the U.S. armament production program and describes in detail many of the trials and tribulations taking that program to fruition. Lieutenant General ‘Big Bill’ Knudsen was originally employed with Ford and later with General Motors where he learned his production methods and forged the basic methods which eventually became industrial methods employed in the American tank industry.

The ambitious government armament production eventually brought together some of the largest American companies including Ford, Chrysler, American Car and Foundry, American Locomotive Co; Baldwin Locomotive Works, Pullman Standard Car Co; St. Louis Car Co; American Bridge Company, Oldsmobile and hundreds of smaller engineering companies across the country. The teething issues are fully described and lengths that several of the companies went to hinder the contracting officers. I was intrigued to see the analysis of the cast steel hull over the armor plate hulls, which would eliminate bolts and rivets and save over $3,000 per tank.

Additionally, as I read the text and studied the numerous photographs and very well written captions, I developed a great appreciation for the M3 Lee and Grant tanks, as well as the differences between the two tanks. The photographs detailed the tanks in all phases of their construction, with a great many internal and external details.

I was aware of the early development of the radial engines for the M3, I was not surprised to learn that eventually led to diesel powered and later a larger multi-bank engine. Additionally, there is a chapter dedicated to the various conversions of the M3, including the T2/M31 recovery vehicle in several versions and the Leaflet, the canal defense light. These mounted a moveable turret and a 13 million candlepower carbon arc lamp to illuminate battlefields.

Last but far from least, the descriptions of the M3 in combat, especially in North Africa is well described in numerous photos. I was surprised to both an M3 Grant camouflaged as a ‘sun shield’ tracked lorry as well as photos of both the Lee and Grant versions in British service and U.S. Lees in Tunisia.

The one weakness in my evaluation of this book, is that there is nothing about models or building models of the M3 for modelers, aside from the many photos to document the M3. Don’t consider this a complaint, as I now have more details than I could ever hope to include in a model of the M3. However, I had hoped that there would be some summary of the models, accessories and decals available, especially as the publisher is ‘AFV Modeler.’

I wholeheartedly recommend this book for any members interested in the M3 tanks. As a modeler, I don’t think this book has any rivals.

My thanks for this review copy and my thanks to both David Doyle and Casemate for providing review samples, and IPMS/USA for my opportunity to review, read, thoroughly enjoy, and provide this review.