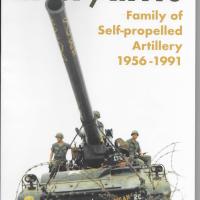 Arriving on the market in 2022 is another publication by AFV Modeller Publications titled “M107/M110 Family of Self-propelled Artillery, 1956-1991”. This soft bound book contains 124 pages with 250 images in black/ white and color format. Authored by a prolific military historian, David Doyle brings to marketplace a history of the M107 and M110 self-propelled artillery vehicles in clear and detail images many of which have not been published before. This well-known author has written over 150 books on military vehicles, military hardware, aircraft, and warships. Each image in the book contains a detailed caption describing what the reader is viewing. This would be especially useful for the modeler requiring reference material.

The book is divided into three sections:

The author presents a summary of the early development of the M107/M110. Between 1952 and 1955 a series of conferences, titled Questionmark, were held at the Detroit Arsenal to advance the design of wheeled artillery vehicles. Discussions within Questionmark IV conference led to the eventual production of the M107/M110.

On page 9 we see a black and white image of the test vehicle, T236, at the Aberdeen Proving grounds. Directly below this image is a colorized image of the T236 in a desert landscape.

Chapter One Production and Evolution

The author on the first two pages discusses the production of the M107 and M110 by the Pacific Car and Foundry in June of 1961. Then in 1962 a contract was awarded to FMC in West Virginia which lasted until the end of 1964. Finally in June of 1964 a contract was awarded to Bowen-McLaughlin-York in Pennsylvania. Additionally, a mention of the different countries is listed which used the M107 and M110 artillery self-propelled vehicles. The following thirty-five pages are one or two images to a page either in black and white or color. All images have captions describing what the reader is seeing.

Page 21 shows two views of an early production M107 with a heavy-duty frame to support a cover for the crew. A flexible duct for crew heat can also be seen.

Moving on to page 27, which is only one page of a 15-page walk-around, we can see the details of the assistant gunner’s seat, hydraulic supply lines and details of the breech ring and breechblock.

Then on page 49 the reader is shown the front of the spade and the gunner’s station.

Chapter Two - Field Use of the Series by the USA

On page 64 we see a M110 with the tubular frame and cover in color during exercises in December 1978. All these images would especially be helpful for the modeler.

An interesting photo on page 70 is of a crewman having shimmied out to the muzzle to insert a barrel plug. Undoubtedly, this image would give the modeler ideas for a diorama with a M107.

The author within chapter two includes numerous images of the artillery self-propelled vehicles in Vietnam by the US Army. As before, the images have captions explaining what the reader sees in the image. All lead to excellent references for the modeler or historian.

This author is not new to this reviewer as I have several books in my collection authored by David Doyle. The book is easy to read with 250 photographs of these iconic artillery vehicles. The fact that some of the images have not been published before adds to the value of the book. The images contained in the book are clear with some rare images I have never seen before. The author includes with each image a caption describing in detail what is contained in the image adding to the readers experience. The book is easy to read with amazing images and captions and will be a welcome addition for reference purposes.

This book will make an excellent addition to any modeler or military historian’s library. I highly recommend.

Thanks goes out to Casemate Publishers and AFV Modeller Publications for this review sample.