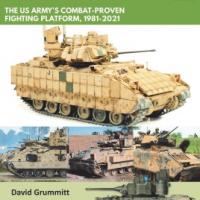 From Wikipedia, the free encyclopedia

The Bradley is designed to transport infantry or scouts with armor protection, while providing covering fire to suppress enemy troops and armored vehicles. The several Bradley variants include the M2 Bradley infantry fighting vehicle and the M3 Bradley cavalry fighting vehicle. The M2 holds a crew of three (a commander, a gunner, and a driver) along with six fully equipped soldiers. The M3 mainly conducts scout missions and carries two scout troopers in addition to the regular crew of three, with space for additional BGM-71 TOW missiles.

David Grummitt is the editor of Military Modelcraft International with more than a decade of building models and writing articles for publication. As well as being editor of MMI since 2009, he is a professional historian who has written several books on fifteenth- and sixteenth-century military and political history.

Slawomir Zajaczkowski writes books such as historical novels, comics, and magazines. A graduate of the University of Lodz, a comic book screenwriter known mainly from albums on historical and war topics, previously also a publicist, his articles about comics appeared in in the Comics Magazine "AQQ". He collaborated with several cartoonists, releasing albums in Andrzej Fonfara ("We remember: Biała Podlaska 1939-1945") and Artur Suchan ("One foot in the grave" screenplay together with Krzysztof Burdon).

Overall, this was a very detailed and informative read. The author goes into detail in every section and offers a good deal of information on the design of the Bradley Fighting Vehicle, the necessary upgrades, features, deployments, combat actions and combat effectiveness of the vehicles.

I have wanted to build and add a Bradley to my collection for a long time.  This book provided me with the incentive to do it. I very highly recommend this book to anyone having an interest in modern military vehicles.  The color images included offer a good deal of detail that will be useful to the scale modeler,

Many thanks to Casemate Publications and IPMS/USA for the opportunity to review this publication.  This book is well worth the money to add to the Scale Modeler's reference library.