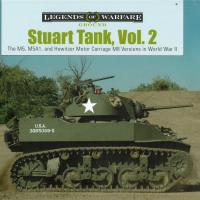 David Doyle is one of the most prolific US writers of books on military subjects, and over the years has penned literally dozens of excellent titles on military aircraft, ships and armored vehicles. One of his most recent is this book on the Stuart Light Tank of WW2 fame. The book is 112 pages in length, and is printed on high quality glossy paper, the pages measuring 9” x 9”. As the title suggests, the book is divided into main sections on three variants of the Stuart. The Light Tank M3 Stuart had been powered by a radial aircraft engine, but as the US ramped up production of tanks AND military aircraft, efforts were made to find alternative power plants so that the radial aircraft engines could be reserved for actual aircraft. Thus was born the Light Tank M5 Stuart, which retained the original turret of the M3 Stuart, but with a new hull required to house the twin V-8 Cadillac car engines now replacing the original radial aircraft engine. The M5 was replaced in 1943 with the M5A1 on the production lines, and was basically an M5 with an upgraded turret, which included larger turret hatches for easier egress during emergencies. The M8 utilized the chassis of the M5/M5A1 while mounting a 75mm howitzer instead of the standard tank’s main armament which was 37mm.

The written word is fairly scarce in this book, pride of place going to photographs. Very short introductions for each main variant give way to plenty of period black and white photos together with color photographs of restored vehicles in private and museum collections. The period photos are mainly one to a page, with a good written description underneath, and thus the photos are fairly large. When it comes to the color photos of the restored vehicles there are up to four photos per page, often showing various details close up. For the most part the photos are well reproduced, always in focus, and are packed with the kind of details modelers like to see.

Over the years there have been numerous books penned on the Stuart tank series. This new book by David Doyle is one of the better ones, and at under $20, gives very good value for your money. I can recommend this book to anyone with an interest in WW2 US light tanks, or the M5/M8 in particular. My thanks to David Doyle for providing IPMS USA with this review sample.