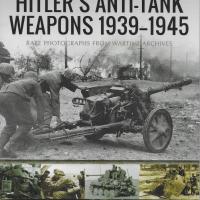 Pen & Sword Books are not new to the plastic modeling industry. The UK based publishing company has been around since 1990 churning out titles covering subjects from military, aviation, maritime and other areas of history.

With over 228 books in the “Images of War Series”, Hitler’s Anti-Tank Weapons 1939-1945 is their latest addition published in May 2020. The author Hans Seidler has written other books in the series including, Hitler’s Tank Killers - Sturmgeschutz at War 1939-1945, Luftwaffe Flak Divisions and Hitler’s Boy Soldiers. This 9.5 x 7.5-inch paperback has 128 pages with 250 black and white illustrations. The book is comprised of an Introduction, five chapters with three appendices. Each chapter starts with 1-2 pages of introduction followed by several black and white images. All images have captions by the author describing what the reader is viewing.

In this chapter the author gives a short background on the introduction of the PaK 35/36 light anti-tank weapon. What follows are several photos of German soldiers in training and more importantly closeup images which are especially useful for the anti-tank weapons modeler. Most of the images of the Pak 35/36 are taken from the Polish and French campaigns during the early years.

On the first page and half the author describes Germany’s introduction of the 5cm PaK 38 used as a replacement for the PaK 35/36. What follows are numerous images of a mix of PaK 35/36 and PaK 38 in field settings. A few images are closeups and several images could be amazing subjects in a diorama setting.

Again, we have another brief description of the Stop Gap Solutions the Germans employed along the southern front of Russia with the advent of the Marder and the conversion of Soviet field artillery.  What follows are images most of which are quite clear, with the authors beneficial captions.

1943 saw the introduction of the PaK 43 (Panzerabwehrkanone and Panzerjagerkanone) to combat the Soviet armour. As in earlier chapters the author provides a brief two-page introduction followed by numerous pages of black and white images. All the photographs are clear and present an abundance of information in imagery for the modeler.

The author in Chapter Five wraps up this book with a few pages summarizing the amount of artillery and forces the German used on the Eastern front. Also, a brief description of the production of the Panzerfaust and its use during the last two years of the war.

A brief description of the following is presented.

The Image of War Series by Pen & Sword Books are not new to this reviewer. Having several books in this series on hand, this will be a welcome addition for reference purposes. The black and white images contained in the book are clear with some rare images I have never seen before. The author includes with each image a caption describing in detail what is contained in the image. If the author's objective was to present a detailed book of the Hitler’s Anti-Tank Weapons with imagery capturing their uses, he did in fact meet this goal. The book is easy to read with amazing images and captions.

This book will make an excellent addition to any modeler or military historian’s library. I highly recommend. Thanks goes out to Casemate Publishers and Pen & Sword Books for this review sample.