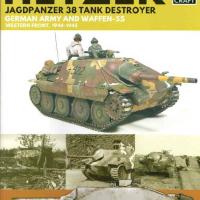 “By 1944 the German army was on the defensive on all fronts and Allied bombing was putting increasing pressure on the nation's industrial output. Since the earliest days of the war the Germans had experimented with mounting anti-tank weapons on obsolete chassis and one of the most successful of these would prove to be the Jagdpanzer 38, more often referred to today as the Hetzer . Small and unimposing the Hetzers appearance belied its effectiveness. Armed with the powerful 7.5cm L/48 gun, the same weapon fitted to the Jadgpanzer IV, the Hetzer featured armour sloped armour plates of up to 60mm thickness and was capable of a top speed of 42 kilometres per hour. Almost 3,000 examples were assembled. Its low cost and ease of production meant that it was Germany's most important tank killer of the late war period. In his latest book in the TankCraft series Dennis Oliver uses archive photos and extensively researched color illustrations to examine the Hetzer tank destroyers and the units of the German Army and Waffen-SS that operated them during the last months of the Second World war. A key section of his book displays available model kits and aftermarket products, complemented by a gallery of beautifully constructed and painted models in various scales. Technical details as well as modifications introduced during production and in the field are also examined providing everything the modeller needs to recreate an accurate representation of these historic tanks.”

This is my third review of one of the Land Craft series books which is the 29th in the series.

If you are interested in Hetzer line of vehicles, I highly recommend this book. It stands just over 2 meters high (approx. 6 feet tall), with a length of just over 4.7 meters, weighing roughly 13 tons and with its speed of 60 kilometers per hour. Each of the many period images are in black & white document the large number of Jadgpanzer 38 Hetzer or PzKpfw 38(t), which comprised more than 2800 units produced during the period of March 1944 through April 1945.

Certainly, from a pure size standpoint the Hetzer was a deceptive piece of armor. The diminutive Hetzer was armed with a 7.5cm gun along with an MG-34 machine gun and surrounded with a sloping armor shell and was considered by most historians as one of the most successful anti-tank weapons of WW II.

Twelve pages of this book are dedicated to the operational units (Abteilung) assigned various versions of the Hetzer. According to the Wikipedia site, the name Hetzer was never used to describe the diminutive tank, though the name Hetzer (from German translated as ‘baiter’ or ‘chaser’) and existed in a briefing paper from Heinz Guderian to Hitler.

This is a great reference book with 64 pages, ten full color side view art profiles and excellent photos the actual vehicles.

The ‘Modelling Products’ section is well worth reading covering 21 pages, including his descriptions about the numerous kits on the market As in some of the earlier Tank Craft books there are many photos of models in both their construction stages and of the completed models illustrating both the 1/48th and 1/35th scale kits. These four kits are all four Tamiya kits, along with kits from Italeri, Academy and Dragon which are used to demonstrate aftermarket photo-etch details by Blue Star, RB Model, Aber, Eduard, Hauler and several aftermarket track manufacturers. In one of the final sections of the book, the author uses several photos to describe the significant differences in several of the production.

One of the many pluses of living in the Pacific Northwest is that we have a Hetzer on display at the Flying Heritage and Combat Armor Museum at Paine Field, near Everett, Washington. There are a number of photos exhibited at the Museum’s website, which I encourage you to visit at: https://flyingheritage.org/Explore/The-Collection/Germany/Jagdpanzer-38(t)-(Hetzer).aspx . Nothing beats the opportunity to walk around this small tank and marvel at its size and camouflage colors.

My thanks for this review book to both Casemate Publishers, Pen & Sword, and IPMS/USA for my opportunity to review, read and thoroughly enjoy this book review. I thoroughly recommend this book for all scale modelers as well as those interested in German WW II armor and markings.