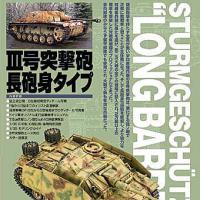 Destroyed over 20,000 of enemy's tanks!
Thoroughly explain about the professional of antitank warat it thoroughly dissects only one AFV so that the readers can be fully informed about it.

The acclaimed AFV Profile 3rd issue is featured on Sturmgesch，tz III “Long Barrel.” Sturmgesch，tz III is the only one that was able to fight against KV, a Soviet heavy tank and T-34, a Soviet medium tank during the Soviet invasion. It also received attention as an antitank which was equipped 75†mm StuK 40 L/48 main gun, known as Sturmgesch，tz 40 Ausf，hrung F , Ausf. F/8 and Ausf. G. Another conspicuous feature of it is that it had turned out excellent tank killers who many of them were awarded Knight's Cross of the Iron Cross like Tiger I did.

The above text was copied from the Model Art website. The reason I did this to start the review is that the above English text is all you will ever see regarding this book or its contents unless, of course, you happen to read this review. There is a 29 page section titled “Details” that contains 29 pages with short, to the point, descriptions of pictures. If you happen to be able to read Japanese, you are all set and will probably thoroughly enjoy this book.

This soft cover book is 144 pages long and dedicated to the “Long Barrel” version of the venerable Sturmgeschutz III. This basically breaks down to the F, F/8, and G models. That makes for a whole lot of pictures in 144 pages. The book covers (photographically) three different Stug IIIs from museums around the globe. It also includes five different 1/35 builds of different Stugs from different manufacturers, a very small listing of available kits in differing scales, lots of black and white drawings, several color plates, some really nice “period” black and white photographs, and a nice two page explanation of the “long barrel” evolution that is in English and well detailed.

As a one-stop reference on the Stug III long barrel, this book is spot-on and much appreciated. The lack of English text was a damper, especially when I noticed something and had no idea what the author included it for or the purpose that it was included. The mix of photographs, color plates and walk-around pictures was nice and enjoyable. I would recommend this book to anyone who enjoys the Stug III and, if you happen to be able to read Japanese, it is a definite must have.

I would like to thank Model Art for writing, producing, and providing this book to IPMS/USA. Thanks to IPMS/USA Reviewer Corps for allowing me to review it and placing the review for others to read. Have fun: grab this book and build one of several Stug III “Long Barrels” currently out there!