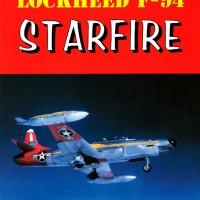 Steve Ginter’s Lockheed F-94 Starfire is one of three of the latest in his Air Force Legends series. This edition is in their standard 8.5” x 11” format softbound publication that is 160 pages (excluding covers). I counted 406 photographs (15 in color) along with 82 drawings and 63 insignias.

Author Alan C. Carey is a noted military historian who was born in Orange County, California in a career military family. Carey got to Texas as soon as he could and achieved his Baccalaureate and Masters degree at Southwest Texas State. His interest in military aviation is primarily due to his father’s service from 1942-1966. Carey’s research on his father resulted in his father (and two members of his crew) receiving Distinguished Flying Crosses and Air Medals for their WWII service with VB-109. He ended up serving in the Marines as a machine gunner and in the Army Reserve ass a Nuclear, Biological, and Chemical Defense Specialist.

The Lockheed F-94 Starfire was a first generation jet to meet the needs of an all-weather, day/night fighter to succeed the North American F-82 Twin Mustang. Lockheed has proposed and advanced version of their Shooting Star as early as 1945, but it wasn’t until the appearance of the Tupolev Tu-4 bomber that the Air Force jumped on board. Essentially a stand-in while Northrop got their F-89 Scorpion developed; the F-94 did serve the USAF from 1950 through 1958 and did see combat in the Korean War.

This edition follows the well-established format for all previous Ginter books. Alan C. Carey starts off with a background on what led to the F-94 and follows with the design and development of all versions. I was especially intrigued with the YF-94D, unofficially nicknamed “Needle Peter”, a dedicated ground attack variant. Large clear black and white photos show off the details of the Starfire, including cockpit pics accompanied with labeled drawings of each version. Technical drawings and photos show off landing gear details and every access panel.

The next section is a unit by unit history of the thirty-two USAF squadrons and the twenty-two Air National Guard units that operated the Starfire. Included are black and white photographs or drawings of squadron patches. Carey also includes the Eglin AFB training and test units along with the F-94C utilized by the predecessor to NASA, the National Advisory Committee for Aeronautics (NACA). Detailed photographs of the in-flight thrust reverser are quite interesting.

The last section is focused on model kits of the Starfire. A description of each kit also includes photographs of the kit box-tops and views of the finished model. The inside cover features the F-94A used in Howard Hughes’ movie ‘Jet Pilot’ starring John Wayne and Janet Leigh. An excellent film to watch while you are building your Kitty Hawk F-94C!

This tome is an essential reference for the Lockheed F-94 Starfire with plenty of photos and illustrations to help you with your box-scale, 1/72, and 1/48 kits. If you have any of the Ginter Naval Fighters or Air Force Legends series, you know how great a value this book is. Highly Recommended!

My thanks to Ginter Books and IPMS/USA for the chance to review this great book.