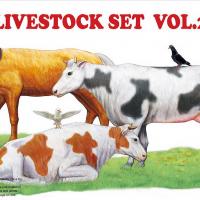 A relative newcomer to the model world, Riich Models has given us some little jewels in armor, ships, and aircraft. Their latest effort, Livestock Set, Vol. 2, will provide some useful animal figures to liven up dioramas of all periods. Included are a grazing horse, two cows, and two birds which look like pigeons. All armies of World War II used horses to varying degrees, and civilians commonly used horses everywhere. The cows would most likely be found in rural scenes; I’m guessing many modelers will use these in a Normandy diorama. The pigeons can be used anywhere, perched in a tree or on a telephone wire. Don’t forget that pigeons were used for carrying messages, even by U.S. troops (who often carried the birds in captured German gas mask canisters).

This model consists of 28 flash-free light gray pieces. Detail is very good, such as the veins on the side of the horse. Assembly is pretty straightforward, with the only problem being the heads and ears are separate and it’s hard to avoid seams that will not require filling or sanding. Most seams were not a problem, but as I expected, the head on the horse and standing cow required some work, as well as between the forelegs on both animals. Glue the feet on the birds while the birds are still attached to the sprue.

After cleanup and assembly, a quick shot of white primer and it’s off to the paint shop. A basic painting guide is shown on the back of the box. Frankly, I have never seen a horse with black mane and white tail. I would recommend looking at a reliable resource for painting.

I wanted to research the cows a little, so I looked on the web for information on cattle breeds found in Normandy. This was the major industry in the area during the 1900’s. The predominant breed was the Normande, prized for its dairy production and meat. The Normande (or Normandy) herds were decimated in World War II, caught in the crossfire of the opposing armies; the breed has made a comeback in France and is popular in South America and the United States. I had found the perfect breed to model.

The Normande cow is white with spots of brown to dark brown over the body, on the rear of the legs, and almost always over the eyes and ears. Patches on the shoulders can be large and cover most of the area, or small, sparse patches can be seen. The udder is a very light flesh color, hooves are a warm gray.

For the horse, I went with a medium brown color. I mixed pink with the base color and painted the belly and inner legs, where the hair is thin. I also used this color on the nose, mouth, and around the eyes. The mane, tail, and lower legs are black, and colors are blended with a brush with mineral spirits on it.

I painted the birds as wood pigeons, a common type of bird found throughout much of Europe. Gray bodies, with lighter gray under the wings, a slight red tint to the breast ,and small white patches on the sides of neck. The birds came out very nice, although they are probably too small to see in the photos, and I wish there were more birds included in the kit.

These animals can add a lot to a scene, and are fun to paint. I have a place for the little birds already, and plan to incorporate the cows into a Normandy diorama. Thanks to Dragon Models USA and IPMS/USA for the review kit!