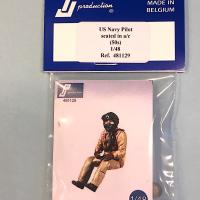 Thank you PJ Production for providing this elegant aircraft accessory pilot figure, and thank you to the IPMS Reviewer Corps for letting me review it! I am very appreciative of all you do for the scale modeling community.

The pilot arrived in a small blue-labeled plastic bag holding a single casting plug with all of the parts and a small color painting-suggestion insert page. The light gray resin showed no sign of mold release and the minimal flash is easily removed without compromising the fine surface details. The separate arms allow custom positioning to suit the application, and the arm-torso join surfaces are slightly dished into the torso, easily allowing drilling or flexible wire to reinforce the joint. Part joins fall on natural breaks, like belt and shoulder seams. The resin is not too brittle or too soft. Many detail surfaces, such as harnesses and straps are slightly undercut, allowing highlighting washes a good place to pool and do their job. The flight helmet is ribbed, however the ribs could easily be shaved down for a smooth helmet. There are missing fingertips on the left hand and most of the right hand is missing on casting. However, these missing digits could be filled without too much difficulty.

The figure is designed to be seated in a cockpit. The seat harness straps are raised slightly off the shoulders in back, allowing effective blending into PE or other straps on the aircraft seat. The straps have a bit of resin support below, which can be trimmed out as needed. A separate oxygen hose adds dimension to the figure. A small block or parachute may be added for the pilot to sit at the correct height.

The only problem I had with this figure had nothing at all to do with the figure itself. The detail is very crisp, which highlighted my novice figure painting skills! This pilot figure was a joy to put together and paint, including the previous caveat.

I highly recommend this kit, for the ease of assembly and painting and the versatility for enhancing any WW2 through early 1950s USN aircraft. Thank you again to PJ Production and the IPMS Reviewer Corps!

Parts on arrival, on pour plugs
Previous Next