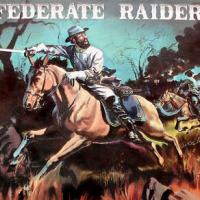 Editor's note: Although the scale is unkown, the figure stands Rider: 5" approx, Horse 7-1/2"

Originally produced by Aurora Models in 1958/1959, this kit has been around awhile, although until recently only in the kit collectors realm. Moebius Models has chosen to rerelease this gem of yesterday, with the same box art and instruction sheet guaranteed to bring you back to your childhood days of saving your paper route money to buy one of these babies for about 3 whole dollars. The horse looked very familiar to you when you got it home and opened the box. But that’s only because this fella had been released twice before. The first time seating the mounted Gold Knight of Nice, part of the original Aurora Knight set. The second time around, an Apache Warrior was atop this fine steed’s back. The third time being the charm, here comes the trusty mount again, this time carrying a Confederate Raider!! Talk about some mileage!!!

The kit is typical Aurora from back in the day. The plastic is heavy, but fairly flexible. The detail is fair, but not very realistic, and the model has an overall toy like appearance when complete. It isn’t the finely detailed horse and figure mounted sets we see coming from Europe today. What it is, is a charming piece of nostalgia which will bring anyone of a certain age group back in time. It was fun to build then, and it’s just as fun to build today. I have no idea what scale it’s supposed to be. It’s over 16” to the tip of the sword, so it’s big!!

One of the joys of this kit has to be the instructions. Printed on one large sheet of paper are all the elements of the original Aurora release. There are three steps diagramed with accompanying text that include part names and part numbers. The complexity of each step is reflected in the number of sub steps within each main step. The bottom of the page has two B/W photos showing the completed model in front and back poses. A painting guide is also included which call out 14 colors. The back of the sheet has a short section of text explaining the release, and some additional artwork.

The build began with the horse, followed by the Raider rider. I built the saddle and prepped the other gear at the same time as the horse to ensure a good fit during final assembly. Constructing the horse was easy and straight forward, with no obvious glitches. It looks fine when assembled, and following the directions during construction proved all the steps are laid out correctly, with no hidden flaws later on.

The rider was assembled into sub assemblies which included the arms, torso, boots, head, and hands. The fit of the parts was generally good, however all seams needed work to finish. Most parts only needed a little scraping with a sharp knife blade, while a few others needed an application of sandpaper to correct. Only a few spots really needed putty, but had I not been working on a review would have spent more time dressing the seams. When I thought the seams were sufficiently clean, I primed the parts with flat white enamel paint. I went back and repaired any of the seams which needed more work, then reprimed. I thinned the primer with painters lacquer thinner to achieve a good paint bond with the plastic.

When satisfied with the primer coat, I base coated the model with acrylic paint from various manufacturers. The rider and some parts of his equipment was base coated using a brush. The horse, tack, and remainder of the equipment were painted with an airbrush. Highlighting, shadows, and other shadings were applied with artist oils and enamel paints. Details were painted in last to complete the painting portion of the build.

Final assembly was straight forward, but a little tricky in ensuring the horse, tack and rider came together in the areas that needed to meet. I had a Zen moment where the method to ensure the meeting of all the components in space and time became apparent, and it worked almost to a tee!! The reins proved to be the most demanding part of the final assembly. I used the reins to determine where the rider’s hands needed to be when attaching him to the saddle. When I was reasonably happy with the way the rider sat in the sale, and the reins met the left hand, I epoxied the rider to saddle, attached the reins to his hand, and set everything aside while the epoxy kicked. I attached the stirrups to the rider’s feet, and then bent the stirrup straps to connect both ends. This worked out better than trying to attach the straps to the stirrups before attaching everything to the rider’s feet. The rifle, bed roll, pistol case, and scabbard were then attached. The last thing I attached was the rider’s right hand with his outstretched sword. The model was now done. One final detail became clear when everything was attached.

The completed model was top-heavy, and was tricky to get to stand on its own with any amount of stability. To alleviate that issue, I mounted the horse to a piece of oak I machined to accept three sheet metal screws through the base, and epoxied into the horses feet when tightened. The edges were routed with a 45 degree chamfering bit. Then a coat of dark stain and two coats of a high quality sanding sealer were applied. I had thought about doing some groundwork to the base, but decided against it due to the toy like appearance of the completed model. I think the plain wood base looks good next to the model, and enhances the overall appearance.

Overall this kit has a number of things going for it, and a number of things going against it. On the plus side, this is one fun kit to build. I had a blast working on it, and I think I had a better time building it now than I did back in the day. That may be due to a higher level of patience and technique on my part however!! The parts fit reasonably well for a kit of this age, and the fairly soft plastic helped with part clean up, and fine tuning adjustments during final assembly. While the pose of the horse seems a bit odd, and certainly not as it appears on the box top, the construction was straight forward. The tack attached in a way that worked with a little preplanning, and has some brass hardware on it that really punched up the overall appearance. The down side is that the model has an unrealistic facial pose, the shape of the sword and scabbard leaves something to be desired, the seams need more work that I did to mine, and has that overall toy like appearance.

Then there’s the nostalgia aspect of this kit. Not having been available for such a long time makes for an interesting subject to bring back for another look. Moebius should be thanked for bringing this kit back to market. I would recommend this kit to any number of people. Anyone who has never built an Aurora model should build this kit. It’s about as close to an original as you can get, and still have some cash left in your pocket!! The Civil War nature of the subject is cool, and is perfect timing for the 150 anniversary of the conflict. And remember, with its age this model was new during the centennial celebration!! Overall, this is a welcome reissue of an old favorite, and I happily recommend it as a great build. My hearty thanks to Moebius Models and IPMS/USA for providing this kit for review.

Figure left side from rear