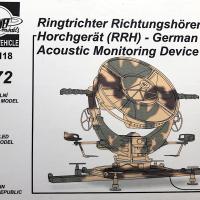 Ringtrichter Richtungshörer Horchgerät, or literally ‘hearing aid for anti-aircraft guns’ were developed in the First World War as military reconnaissance devices to locate guns on the battlefields. The successes were modest, however, because artillery fire is only short-term sound events, and there were several gun positions on the battlefields so that the localization was difficult. The directional receiver was much better suited for the localization of aircraft. By means of several devices, the true position of a relatively slow sound source moving in the subsonic range could be determined by cross-bearing. They were still used during the Second World War in order to locate enemy aircraft, even in weather such as fog or darkness. With the increasing speed of aircraft and the invention of radar technology, the Richtungshörer was largely obsolete.

This kit is from Czech Master’s Kits (CMK), which is now part of Special Hobby.

The kit comes in a 7” x 5 1/4“ x 1 1/2“ thin cardboard box. The parts are molded in light gray resin and packed in plastic bags, one for the large parts, and one for the smaller parts. There was one small piece that had broken off and was loose in the bag. The parts are attached to casting blocks, and have very crisp, sharp detail even on the smallest part. There is some warpage in the long rail piece that will need to be straightened out. There are 21 parts in the kit.

Detail paint colors are called out in the assembly steps in Humbrol numbers and generic paint name. The two color profiles show one in panzer gray and one in dunkelgelb with olivgrun and rotbraun camouflage. The RAL and RLM numbers are called out for each of the colors. A few numbers and insignias are shown on the profiles, but no decals are included.

The first step assembles the bottom rail, platform, and leveling jacks for the antenna. Check the jacks closely before removing flash to make sure the top handles are not cut off. Wheel dollies to transport the antenna are not provided with the kit.

Step number 2 assembles the wire grab bars, grab rails around the antenna, and the center antenna piece. There are small indentations inside the internal element to locate part number 5.

The third step is the final assembly of the subcomponents, the substructure platform, yoke, and listening antenna assembly. This step includes installing some small hand wheels and seats for the antenna operators. The hand wheels and seats both require some careful cleanup to remove internal flash from the pieces. Parts 14 and 15 don’t quite install as shown in the assembly instruction, so refer to the photos. If part 15 is not glued to the antenna assembly, the antenna can still rotate. The yolk mounts to the substructure in a square opening so it will not rotate.

This is a nicely detailed little kit that will add a nice accessory to dioramas, particularly those with antiaircraft guns. Experience working with resin kids would be very helpful for assembly and cleanup of some very small pieces.

Thanks to CMK and Special Hobby for providing the review sample.

Leveling jacks with #11 for scale