Lioness and Lion of the Line Volume 2 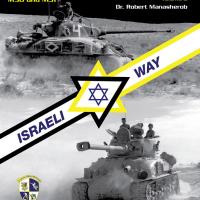 Doctor Robert Manasherob just keeps making our day for those of us that are into the Israeli Defense Forces! His many in-depth books covering the armored vehicles of the IDF are nothing short of spectacular! His books often contain personal insights and stories that help bring the books to life. The inclusion of never before seen pictures and color walk arounds of the actual vehicles are a modeler’s dream come true. The only better way to research these topics would be for you to go to the Latrun Museum yourself.

Lioness and Lion Volume II is a continuation of his first book. While this publication mostly covers the M50 the author has also thrown in some beautiful period photos of the M51 “Dagem Alef”. This was the first production M51 vehicle. These were the new 105mm gunned, T-23 turreted M51s. They were mated to the M4A1 cast hulls with HVSS, Israeli initial stowage and still powered by the R-975 radial engine. Do not confuse this Alef with the new Tamiya release of the M51. The Tamiya release is a “Dagem Beth” or the first Diesel powered M51.

The book is typical SabIngaMartin fare. It is eighty pages long and done on thick high gloss paper. It is what is inside those eighty pages that characterizes Robert’s books as “must haves”! This is where the “meat “is. The book contains over 180 black and white and color photographs. Robert has done a great job of researching IDF history and gives you some of that throughout this tome. The history is well written and easy to follow. The M50 pictures are mostly of the units conducting training in the Southern training areas and many conjure up some great vignette or diorama ideas and possibilities.

The very first M51 picture is worth the cost of the book alone! It is an M51 “Dagem Alef”. The photo is full page and appears to have been taken on the assembly line after finishing. It is a rear shot and shows the HUGE muzzle brake to advantage. But there is so much more in this one picture. The First M51s were produced on the M4A1 cast wide hatch Shermans with HVSS. The 105mm gun was crammed into the T-23 turret and then the two were mated together. For some unknown reason, the IDF decided to put these new turrets onto the M4A1 still running the R-975 radial engine. The increased turret weight, IDF stowage, HVSS suspension, and ammunition must have put a substantial strain on that poor engine. There are several more photos of these M51s being put through their paces in training areas. Also, throughout the book are several M51 and M50 color plates as well.

The last part of the book consists of color walk-arounds. Robert opted for a new approach to this and I thoroughly liked it. This time he has taken several surviving M50s and created a comparison photo essay! The array of photos is designed towards the turret. This is a really neat touch and definitely welcomed. To date, no one has produced an accurate M50 turret in plastic or resin. It is Robert’s intent to allow the model maker the ability to make an accurate turret. The biggest issue is the shape of the Mantlet cover. Basically speaking, it is not symmetrical from the left to the right side. Overall this is just another great book in a series of great books that this author has released to date. I look forward to each volume and have never been disappointed yet!