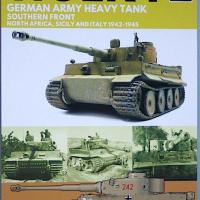 Pen and Sword Books’ latest release in their Tank Craft series details the Pzkpfw VI Tiger 1 Heavy Tank. This series of books is designed to provide model builders and tank enthusiasts a detailed visual reference of the actual tanks featured, as well as their scale model equivalents. This book focuses specifically on the Tiger I tanks deployed to the southern front for the North Africa campaign through the retreat and withdrawal into Sicily and up Italy until the end of hostilities in May 1945.

The book starts with a bullet point timeline of the major battles and military movements by both the Allied and Axis forces across the Southern Front of the war in Europe, starting with Operation Supercharge in November 1942 through the end of fighting in May 1945. History buffs might be put off by the brief details provided in the timeline, but I found it interesting to see when the various battles across North Africa, into Sicily, and in Italy took place, and I made a few notes to follow-up on some dates that piqued my interest. The author’s attention to details is very evident in this section too, as in numerous places he lists which specific company was in action, or being deployed, as well as the number of Tigers allotted to them and even who specific commanders were, or who they were replaced with in the event of their death. Another nice aspect of this section, is that each page features an interesting photo of a Tiger 1 in action at different points in the war. Many of these photos are ones I hadn’t seen before, including quite a few interesting pictures of the tanks being transferred via ferry to and from various campaigns.

Following the timeline section, a large part of the book covers model kits, aftermarket parts, and completed examples of a number of Tiger I models. This section of the book almost reads like a brief review of the various offerings, with photos of photoetch parts in place on unpainted models, as well as some discussion about the actual Tiger I versions offered by various model companies. There is also an excellently researched section discussing the actual painting orders for the Tigers serving on the Southern Front, and now I’m concerned that I may need to throw out all of my Dunkelgelb paint, since that seems to have not necessarily been the color used for a large number of these tanks.

The author also includes an extensively researched section of color illustrations demonstrating the various color schemes, unit emblems, and camouflage patterns of several tanks with carefully detailed photos of the actual tanks included. This section alone will really prove useful for anyone planning a Tiger I build. In several places, the author follows a specific tank across several battlefields detailing the changes in numbering and unit insignia. It’s pretty amazing research work.

Overall, I’d highly recommend this book to anyone with an interest in the Tiger I, and especially for anyone building or planning to build a Tiger I. The photographs, detailed information, and color illustrations are incredibly interesting and useful.

My thanks to IPMS and Casemate for this review sample.

The Tiger units
Previous Next

All of this information was published on TIIF.DE over a year ago.

Thanks for your comments. We do not do background or in depth history on our subjects but prefer to focus on the buildability of the kit. No idea what TIIF.DE is either.