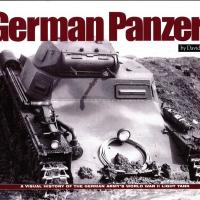 Ampersand’s latest book continues to expand on their Visual History format follows the same look as David Doyle’s “USS California”. Ampersand got their start in 1993 when Pat Stansell distributed a free issue of Military Miniatures in Review at the IPMS Nationals in Atlanta. Ampersand joined forces with HobbyLink Japan in 2008, and have continued to expand their military AFV publications ever since.

True to the Visual History Series name, the focus of this book in on the visual, detailing the development and service history of the German Panzer I. After World War I, Germany was banned from the manufacture or even utilization of any armored combat vehicles, so the Panzer I was developed in secret. This permitted manufacturers to stay up with the rest of the world and allowed the German military to maintain their operational knowledge of the latest and greatest in armored fighting forces. Although only armed with twin machine guns, these tanks found opposing forces that were ill-prepared for the technology and organization. Ampersand is calling this an “Extended” version of their Visual History format, and it runs 168 pages packed with large, clear photographs of German Panzers. As a bonus, this book ends with a 16 page walk-around section in color.

I counted 205 well-captioned photographs, including 45 color pics in the walk-around section.

This is a gorgeous hard-bound book, and is well worth the money. The first sixty pages are dedicated to the Pz.Kpfw. I Ausf. A, with large clear pictures that not only show the tanks in action but highlight their details. The next 37 pages are dedicated to the Pz.Kpfw. I Ausf. B. I really enjoyed the section on Pz.Kpfw. I Variants. I had never really considered it before, but the driver training tank variants were a great way to get crews prepared. The Pz.Kpfw. I tanks that were modified to carry explosive charges to attack pillboxes was also an eye-opener. Highly recommended!

My thanks to The Ampersand Group, Inc. and IPMS/USA for the chance to review this great book.