Panzers in Normandy - Then and Now 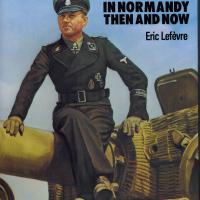 This is the eighth printing of this book detailing the Battle of Normandy. The book is divided into an introduction, 21 sections, a glossary and a comparative rank section at the end. The first section is dedicated to the table of organization of the regiments that participated in the battle. This is followed by a description of the principal and ancillary vehicles in battle. Next section is dedicated to the units involved, and describes each unit participating in the events. This section is divided in the units of the SS and Heer in combat. A small section talks about the retreat of the German forces in the area after the Battle of the Fallaise Pocket, followed by another section describing what is left of the battle. The book ends with a glossary and a comparative rank table.

The first section dealing with the organization of the panzer regiments is interesting as it shows in a graphic way what each regiment components. The graphic description includes the Staff Company, Anti-aircraft Platoon, in addition, it shows the formations that comprise the 1st. and 2nd. battalions, as well as the two supply companies and the repair company. Each Battalion is divided into a Staff company as well as four Panzer companies.

The next section is completely dedicated to the equipment that participated in the battle and includes such equipment as the PzKpfw IV (SdKfz 161) SdKfz 161/2, PzKpfw Panther (SdKfz 171), PzKpfw VI Tiger AUSF E (SdKfz 181). Each vehicle is described with specifications tables, as well as a small history of the equipment. This is a group of 10 major vehicles, followed by a small section that talks about several ancillary pieces. The next section introduces us to the uniforms of the units that fought at Normandy. This includes both The Heer (regular German Army) and the Waffen SS. At the end of the section there is a small history of the German Tank Combat Badge and the Panzerlied song.

Prior to tackling the Heer and Waffen SS Regiment the author shows us the location of each of the combatants prior to the Battle of Normandy. The maps give us the areas of responsibilities of each regiment on D Day. This is followed with a description of each of the units involved in the battle for both the Heer and the Waffen SS. The author describes the retreat (Der Ruckmarsc) and what is left at the present time. It has to be noted that some relics can still be found at the storage site and some of the machines that took part in the battle are now part of either museums or outdoors displays in the area. The Glossary gives you a complete description and/or translation of all the German words used throughout the book.

I enjoyed the book very much, but on the other hand, I have to admit that I enjoy every book from The After the Battle. I have always found these books very informative and entertaining. It is interesting to see the comparison of the photos, one at the time/or close to it of the battle and one taken 30-40 years later. My only concern, and that is a small one, is that there are no color photos of the events or the uniforms. Although, this is a concern it does not detract from the book as the information is still relevant and accurate. I will recommend this book to historians and diorama modelers.

My Thanks to Casemate Publishers for allowing me to review the book and my in house editor for her help correcting my mistakes and improving the review.