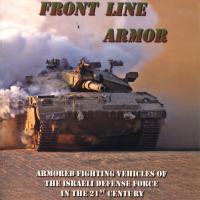 I have been a fan of the Israeli military for many years but have concentrated my interest on the 1967 and 1973 wars. Their ingenuity regarding their armor and aircraft make them more interesting than German Panzers, in my opinion.

This is the first book in a new series by Wizard Publications (Israel) on IDF Armor. Wizard has done many books on the Israel Air Force and it is nice to see them take up the armor side.

This softcover book is full of full color pictures of the modern Israeli armored fighting vehicles starting in the late 80’s on up through 2011. This time frame covers a change in tactics from the wide open killing grounds of the Sinai to the towns of Lebanon and the Gaza Strip. To meet these challenges, the IDF converted its tanks and APCs to more heavily armored vehicles designed for close-in fighting.

There are 8 chapters in the 80 pages, each chapter including a page or two of historical information and then several full color pictures of the vehicles involved. The pictures are large enough to show the details and give some great examples for dioramas.

The first chapter deals with the fight against Hezbollah after the first Lebanon war and the withdrawal from Southern Lebanon that Israel hoped would stop the attacks on their citizens.

Chapter 2 talks about Defensive Shield which was an operation in the West Bank in 2002 trying to stop the terror attacks on Israeli soldiers and civilians. This chapter includes several good pictures of the Magach, which is Israel’s uparmored M-60 Patton. There are also pics of some of the new APCs.

The third chapter deals with the new generation of Israel’s famous Merkava tank. Many pictures illustrate the changes this main battle tank has gone through from the Mk I through the Mk IV.

Following this is some information on Gaza operations from 2000 - 2005 with the next chapter covering the disengagement from the Gaza strip. Again, lots of good pictures of tanks and APCs.

The next two chapters follow the Second Lebanon War and its aftermath. Included here are some good pictures of M-109 SPGs (Doher in Israel) in firing positions, and the first use of the MLRS system by Israel.

The final chapter in the book covers Operation Cast Lead, which saw the IDF once again attacking the Palestinian terrorist organizations in the Gaza Strip in 2009.

The pictures, of course, are where the modeler’s main interest will be, and they don’t disappoint. But I was also interested to catch up on the IDF operations in the 21st century.

I would like to thank Wizard Publications (Israel) for the sample and IPMS/USA for allowing me to review it.