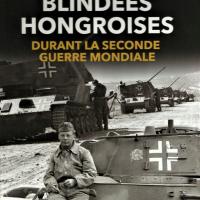 Like many avid modelers of WW2 armor, I have to admit that until recently I had a major blind spot regarding Hungary’s contribution to the Axis cause. Amazingly for such a relatively small economy, Hungary possessed even then a robust arms industry. They did purchase armor from other sources, the most notable being Germany and Italy, but even so their home-grown products were comparable to some of the best equipment in the world at the time. I really have no idea how they’ve slipped under the modeling radar until recently.

Mr. Martinez’s book is absolutely stuffed with never-before-seen pictures of Hungarian armor, both indigenous and otherwise, and although printed completely in French, it still provides an excellent overview of this poorly documented subject. I spent some time translating the chapter and subchapter headings, which gives you some idea of the contents:

The last appendix also lists some of the currently-available kits of Hungarian armor, mostly from Bronco. Happily, the list is now longer than what is shown in the book, so you can put the contents of this useful reference to good use. Despite being only in French, this volume is absolutely chock full of fascinating pictures, supplemented with some useful artwork, and sheds much light on a relatively little-known subject.

My thanks to Heimdal Publishing for releasing the book and to IPMS/USA for the chance to get a glimpse into this interesting subject.