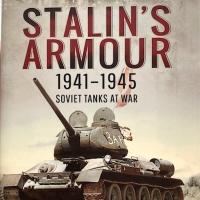 This book covers the story if the Soviet introduction and use of Tanks in World War two and the battles and politics around them.

The book goes into extreme detail on the full history of the Soviet formation of the tank units and their use in WWII.

I found this book fascinating and made me aware of a lot of facts I have never heard before when it comes to the development and politics behind tank warfare in the Soviet Union. The writing style is clear and concise. The images included are all ones I have never seen before.

The first two chapters were of particular interest to me and seeing the early views on tanks and their use against the Japanese.

The book is full of details that really make reading it very informative. This gave me a very expanded view of the Soviet armoured units and the uses in the war.

I recommend this book to everyone with an interest in the Soviet tanks and military history.

Thanks go to Casemate Publishing/ Pen and Sword for providing this book to review and IPMS USA for allowing me to review it for them.