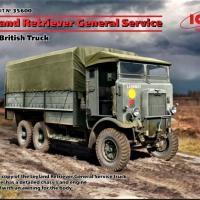 The Leyland Retriever was a 6x4 general utility lorry manufactured by Leyland Motors between 1939 and 1945. Roughly 6,500 were produced for the British Army during that period, and they served on all fronts and in a number of guises, one being General Montgomery’s caravan and also a fully armored version. Personally, I’ve always liked this beast, as it has a distinct WW1 feel to it and couldn’t be more basic – the cabin seats, for example, being nothing more than wooden tool boxes.

ICM’s version is, of course, highly detailed with a number of options. Assembly begins with the chassis, and one of the first options appears here. You can either have fixed front wheel steering or posable steering. Please note that this is NOT fully steerable, as it must be glued into whatever position is desired. The chassis comes with a fully detailed engine, although because of the arrangement of the real vehicle there’s not much opportunity show it off, access being limited to hatches inside the cabin.

Attachment of the rear wheels to the chassis is notably dicey, as they attach to small rounded bumps on the axles, providing little in the way of guidance. My suggestion is to assemble these onto the chassis, position them straight as best you can and leave it to harden for a few hours at a minimum. The spare tire holder is also a bit fragile, as it can swing down into its release position like the real thing.

The cabin face can be built with a small shelf for the anti-gas panel or without. As a note, although it’s listed as a non-use part, the face without windscreen is actually appropriate for the earlier version of the Retriever, which didn’t have a windshield of any type. The radiator is the only location on the model which utilizes photoetch, as a very nice radiator screen is included as well as nameplates for the radiator (which are also duplicated on the decal sheet). Speaking of such, the decal sheet also provides instruments for the control panel – a nice touch. Add the running boards next, but be aware that they’re fairly fragile.

The cargo bed features a detailed framework system and like the real thing, an extremely basic cargo are with simple benches and nothing else. Although the read cargo door is not designed to be opened, it would be a fairly simple job to convert it. A few simple tool boxes are added to the underside, and that’s about it. There is a choice of a multi-part full canvas top or open framework, both of which are very nicely detailed. However, if you’re using the canvas top, to be strictly accurate you’d want to add the tie-down to all the catches along the sides of the cargo bed.

As a modeler, I admire ICM’s efforts to make everything to scale, but it does make for some particularly fragile assemblies. The canvas top features some VERY fragile supports which I spent an inordinate amount of time trying not to break off while filling and sanding the multipart canvas top. I can only imagine what the open framework would be like. The running boards, as I said, are also quite fragile as are the tiny secondary lights at the front of the cab. In fact, there were times when I had a hard time figuring out how to hold the model simply to airbrush it without damaging something. I finally resorted to placing it on a board so I could turn it around without handling it at all.

Two choices are provided on the decal sheet, but there are really quite a few schemes this vehicle could be painted, including desert or mouse-ear camouflage. It can also be easily converted to a number of configurations including a field workshop. This useful vehicle was used in virtually every theater of war, so the possibilities are endless.

Overall, I found the kit to be a joy to build. Assembly, as always, was straight-forward with little in the way of putty or filling required, and the final machine certainly looks the part. I happily recommend this model to anyone with a little armor assembly under their belt and I’m sure this will be turning up in a lot of dioramas. My thanks to ICM for releasing such an interesting subject, and to IPMS/USA for letting me take a stab at it. Happy modeling, everyone, and stay safe!