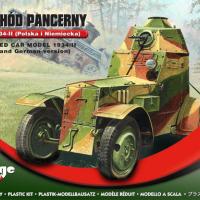 The wz. 34 armored car was developed as a modification of the wz. 28 half-track armored car with the tracked wheels being replaced with tires. This allowed simpler maintenance and improved the off-road capabilities. Ten squadrons of armored cars (80+ vehicles) were mobilized in September 1939. In these first days of fighting, the cars were used for reconnaissance and support. Polish crews achieved success by using the element of surprise despite German equipment superiority.

Although containing a moderate amount of parts, the kit builds into a fairly detailed model. There is a lot of flash on some of the smaller parts that can be difficult to remove. Great care must be taken not to break parts removing them from heavy sprue attachment points. The model does not have an interior so there needs to be a lot of research if one is to be added by the modeler. The instructions are in the exploded view format and the individual parts are called out in numbers corresponding to locations on the sprues. There is no parts layout diagram showing parts locations on the sprues and I ended up with some parts left over. Maybe they are for another variation of the vehicle. Three different types of weapon armament are offered for the turret depending on which version is being built. There are three different paint schemes offered: a segmented 3-color scheme introduced in 1931/1932, a non-segmented 3-color scheme introduced in 1936 and a Panzer gray scheme used on a captured German vehicle in 1939.

Construction starts with gluing the vehicle sides to the model base. The body is molded in a fine coarse texture that to my eyes looks like the armor it is meant to represent. The back of the body is attached next along with a choice of radiators: a closed or open armored radiator or a conventional looking radiator. A viewing plate for the driver is attached next along with undercarriage parts, axles and suspension. Fenders can be attached next using bent attachment parts. The turret uses a part that fits into the body top and can be locked in place if desired using two tabs corresponding to slots in the body top. A small piece for the armament can be attached to the front of the turret at this time. The kit comes with rubber tires that have heavy molding flash on the tread that needs to be removed. Tires fit on a 2-piece rim with a short cylindrical piece attaching the wheel to the axle. The fit to the axles varies so care must be taken to align the wheels before any glue has a chance to set. The front axle location seems a little too far forward and I did not realize that until the front wheels were attached. A shovel and a large pickaxe are two accessory items offered. I chose to paint my model in a Panzer gray scheme due to the complexity of the 3-color segmented scheme. A series of paper signal flags are offered to attach to the completed model using small wires if the 3-color segmented paint scheme is done. The Panzer gray scheme has white cross decals for the sides and front. The decals are very thin and when I tried to apply the large crosses to the body sides, they disintegrated but the ones on the front and back of the body and the turret sides went on fine.

I usually build aircraft, but wanted something a little different for a change of pace. Mirage’s armored car may have been easier for a dedicated armor builder, but I still had fun trying my hand at building something different. My last armor model build had been many, many years ago. Even though I may have had difficulty at times with this build, it was interesting and educational. The armored car builds into a neat little model that would be an addition to any diorama pertaining to the early days of World War II.

I would like to thank Mirage Hobby and providing this kit to IPMS/UAS and allowing me to review it.