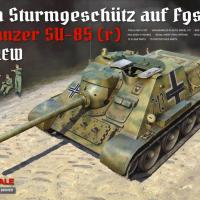 The SU-85 was a self-propelled gun. It was developed on the T-34 medium tank Chassis which also resembled the SU-122 assault gun. It was produced from 1943 through mid-1944. The 85-mm gun allowed the SU-85 to effectively hit enemy medium tanks at a range of over 1,000 meters and was able to destroy a Tiger tank from this range, rendering it a very capable weapon against the newer German tanks.

This kit is a Soviet SU-85 captured and put into service by the German army during WW II. This model is extremely detailed. It has workable track links, and five figures representing the crew. It has a total of 712 parts, 627 of which are plastic, 75 that are photo etched, 10 clear plastic parts, a decal sheet and an instruction booklet.

When I opened the box I was absolutely awe struck with the number of sprues and parts. The sprues are literally jam packed in the box and neatly wrapped in plastic bags.

Assembly starts with the lower hull. There are a lot of parts and the assembly looks intimidating but once you start assembly you will notice that there is something special about this model. I immediately began to notice the level of detail and the parts fit. It is excellent. Even though the parts fit is amazing you still must take care to not rush assembly and ensure that the parts are aligned properly and allow them ample time for them to dry straight and true. Also pay close attention to the part numbers as there are several parts that have slight differences but look the same and the part number keeps the right part in the right place.

As I continued assembly of the lower hull I was again amazed at how the hull side part numbers B1 and B12 fit. I would also like to point out that when you assemble the suspension arms in step parts F11 and FK6, make sure you use an ample amount of cement and allow them to dry thoroughly so you don’t have problems later when adding the road wheels. One thing I would like to point out is do not glue parts B25 and B26 when you glue build the lower hull so you can use them to adjust the final track tension.

When you reach step 4 it does seem a bit unorthodox that you add the front of the hull but don’t worry the parts fit is so good it will make sense later. When you reach step 16 you will have completed most of the lower hull and gone through a lot of parts but I was impressed at this point and in fact I went out and bought the SU-122 which I am looking forward to building in the near future.

The next steps in the assembly are primarily the gun which is a miniature work of art and has a nice plastic barrel. If you so desire you can purchase a direct replacement from Aber for this kit which I am going to do for the SU-122 when I build it but believe me it is not necessary. There are nice stowage boxes with photoetch clasps that look great when completed and tons of detail that is present on the hatches, engine covers and vents.

Once assembly began on the upper hull the model began to take shape and was looking very nice. The only issue I had with the kit up to this point was the photo etch parts PE1 and PE2 that go on the engine cover B20. I could not get them to fit and messed them up. Fortunately there is a cover B20 that is molded that you can use that does not require the photo etch parts. The particular paint scheme I was going to do required me to leave the parts off the tank where the rather large German markings would go and this proved to be no problem whatsoever. The upper hull pieces when completed fit so well I could set them in place with no glue; it was amazing.

The tracks are very nice and are the snap together workable type. Take great care and after you assemble a few you will get the hang of how to get them to go together quickly. Again when it comes to the tracks as I mentioned earlier do not glue parts B25 and B26 when you glue build the lower hull so you can use them to adjust the final track tension.

The kit does give you all the necessary details that are absent on my build such as the fuel drums and details etc. but I chose to leaves them off.

I painted the model with Model air paints and used the typical oil based washes, weathering and Mig pigments.

All I can say is this model was a lot of fun and a joy to build. I am very pleased with the way it turned out and have actually added several Miniart kits to my collection since.

I would recommend this model to anyone who has some model building experience. Even though the parts fit is superb and kits are great there are a lot of small parts and it will take a bit longer than the average kit to build just because of the sheer number of parts. I felt the extra time and effort was well worth it. Two Thumbs up.