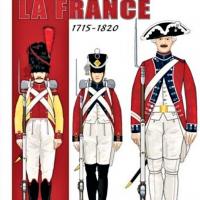 I didn’t really know this, but the Swiss have a long and distinguished history of serving as mercenaries in other country’s armies, especially France, from as far back as the Late Middle Ages all the way through the Age of Napoleon and beyond. The last vestige of this type of Swiss service remains in the Swiss guards at the Vatican today. In some ways, these mercenaries were the harbingers of today’s professional soldiers – men dedicated to a life of arms rather than the temporary civilian levies standard up until that time.

This book by Heimdal studies the history and uniforms of a century of service to the French, starting with the Louis XV and ending with the incredibly colorful period of the Napoleonic Wars. The book is entirely in French, which may prevent one from enjoying the short historical preambles interspersed through the volume, but that’s scarcely where the interest in this book lies anyway. What drags you in is the voluminous color panels of uniform after uniform in all their visual riot. This is a true feast for the figure modeler, and if you can’t find one idea after another leaping at you out of the pages, you’re just not trying hard.

It’s all there, with front and back views of most uniforms, pictures of the fascinating battle flags, equipment details – anything a fan of this era would want to see. Most of these panels have clearly been created on computer, but that doesn’t lessen the quality or visual impact. There are literally hundreds of illustrations in this book – infantry, officers, drummers, musicians, sappers, artillery, cavalry . . . and includes such relatively esoteric units as the Diesbach Regiment, Salis Regiment, various immigrant regiments, the Helvetica Legion, the Neuchatel Battalion (sometimes referred to as “The Canaries” for their yellow jackets) and others.

I have yet to be disappointed by any of Heimdal’s books on uniforms, and I’m not disappointed with this one either. There are so many terrific modeling ideas seeping out of the book that I scarcely know where to begin. This series of books stand as the single best resource for this period that I’ve ever run across in my half-century of modeling. They are, to put it simply, modeling gold. They would be a bargain at twice the price.

As you may have noted, I am totally sold on these books, and you will be too, if you have any interest in the wonderfully colorful period of the Napoleonic Wars. I can recommend this book and any others in this series without any reservations whatsoever. Buy one – you won’t be disappointed.

My thanks to Heimdal publishing for releasing these terrific books, and to IPMS/USA for letting me feast my eyes on this one. Happy modeling, everyone, and stay safe!