The History of Toy Soldiers 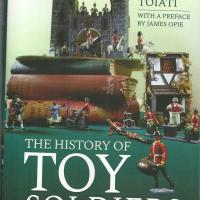 The book describes the religious and martial uses of scale toys in the past and how the model soldier became a toy in the late 1800s through the mid-1950 and a collectible in the 21st century. It includes the evolution from paper, to tin, to alloys and finally to plastic.

It also has a few chapters (listed as “Cameo”) where collectors tell very personal stories of how they got interested in toy soldiers, why they collect them and what aspect of collecting them gives them the most pleasure (it could be going “hunting” to an open market for that rare find or how the old memory of a dime-store gets triggered by holding a given figure).

While the book at times could be described as an academic encyclopedia (it is certainly not short on details of virtually every manufacturer) the book is far from being a boring and tasteless catalog of manufactures. It is a trip down in memory lane -both the author and your own- into the childhood years when toys were simpler and imagination was complex. It is an ode to the joy of collecting and playing with toy soldiers.

Luigi Toiati has written a book that will enter the annals of Toy Soldier collections as one of the best and most complete books on this topic. Reading the book, or simply flipping the pages put a smile in my face.

I would like to thank Casemate Publishers, Pen and Sword Military and IPMS/USA for the review sample.