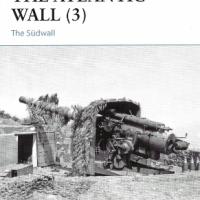 Osprey is a publishing house in the United Kingdom that should be a household name to the swarms of us. Osprey continues to expand their Fortress series with the 109th book in this installment. The Fortress Series examine the fortifications and defense structures of opposing forces. In this case the Atlantic wall which at the time was the most fortified defense in Europe. This “wall” proved successful in forcing the allied forces to find an alternate route after several scuffles forced them back.

For the Fortress series, the chapters are organized as follows:

The book is illustrated with photographs in black and white and color, several descriptive paintings and maps of the structures and positions that are listed above. I especially loved the technical data about how some of the earlier German designs that never found ways into productions still found life in the form of over powering defenses structures that had more than enough firepower. .

My thanks to IPMS, and Osprey Publishing for giving me the honor of reviewing this outstanding title.