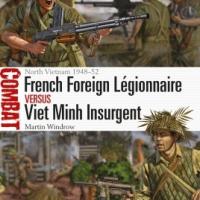 Like a fireball in the night, the story of the Vietnam War dominates our historical consciousness. This new addition to Osprey’s Combat series, focuses on the French Foreign Legion versus the Viet Minh from 1948 to 1952. The book concentrates on a four year period, marking the height of the French occupation and counter-insurgency against the Viet Minh. Combat is one of the newer series of Osprey Publishing and it follows a formulaic format. Each book is illustrated with original art work, depicting some of the combat scenes described in the book as well as historical photographs contemporary to the conflict. The first part of each book provides context for the combat, focusing on the issues related to the larger war and the composition of the armed forces involved in each battle featured. The heart of the book are short narratives of individual battles that also feature maps that allow you to follow along with the actions described in the text.

The book focuses on the French Foreign Legion because they bore the brunt of the fighting once the French made the decision to reoccupy their colony in the immediate aftermath of the Second World War. The Legion, recovering from the destruction of the Second World War, they had access to recruits who were career soldiers wanting work. The Viet Minh were fighting for their independence, but as with most struggles for independence, were at first fighting on a shoe string. As the violence and political stake escalated, both sides received arms and logistical support from client states, notably China and the United States. The French had to fight a classic counter insurgency campaign. Their forces were often road bound and used strong points to hold geographic locations. The Viet Minh could ambush said locations as well as troops on the move, allowing the Viet Minh to carefully choose the time and location of battles with the French.

The battles that the author selected to explore demonstrate the successes and failures of both sides. In the beginning, the French were determined to re-establish a presence along the northern border of Vietnam and failed as the insurgency gained strength. Once the French began to receive more American aid and a political/military commitment to continue to defend vital settlements and communication corridors, they were eventually able to draw the Vietnamese into a set piece battle. Given the strengths of the legion, it demonstrated to the Viet Minh that, at least at the moment, could not stand up against the French. In the end, though, the French may have won or at least fought the Viet Minh to a draw, but they could not win the war. The Viet Minh would learn their lessons and drive the French out in 1954 with the victory at Dien Bien Phu, which is mentioned, but not covered by this work.

Osprey continues to produce books that are of interest to the larger community of historians and hobbyists. French involvement in attempting to reclaim their colonies was the precursor to American involvement in Vietnam. While the conditions changed by the time the United States became involved, many of the challenges faced by the French remained. This slim volume provides a nice introduction to the wars of Southeast Asia.

My thanks to IPMS and Osprey Publications for giving me the opportunity to review this book.