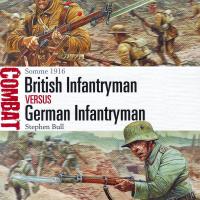 August 2014 marks the 100th anniversary of the start of mankind’s first cataclysmic world war, the disaster that shaped the world as we know it today. According to a recent article I read, there have been over 25,000 books and scholarly articles written on the “war to end all wars.” Here we have a review of one more.

A number of my relatives fought in this monumental bloodletting, including one who was on the Western Front as an artilleryman in a New Zealand unit for over three years, while another fought above as a pilot (and ace) in the Royal Flying Corps. As a young budding historian in the 1970s, I discussed the family history of these men and others, hearing about the “great” battles of the war. One in particular, the Somme, cropped up again and again in my readings and discussions. I was told that on the opening day of this battle, July 1, 1916, British forces alone suffered nearly 60,000 casualties. I remember asking, “Why was there a second day of the battle?” I reasoned, in my youthful mind, that surely after such a day of slaughter some sanity would have quickly returned and they would have packed it all in and gone home...

I couldn’t quite visually come to grips with what must have transpired in these battles, until one day a film turned up at my local cinema and opened my eyes wide. In my humble opinion, one of the greatest films of all time is Stanley Kubrick’s Paths of Glory, starring Kirk Douglas as Colonel Dax, a Western Front commander of French troops. One incredible scene in particular gave me at least some impression as to what my relatives on the ground must have gone through. Reading their accounts of “the trenches,” Kubrick’s trenches are just a little too tidy at the outset (not enough muck). However, once over the top… https://www.youtube.com/watch?v=gPtVNDvwGMo

Initially the war in Europe on the Western Front was quite fast moving, with large numbers of men and equipment covering fairly good distances then crashing into each other and battling furiously before retreating or advancing again. However, the Entente (mainly French and British) and Triple Alliance forces (primarily German) on the Western Front had fought to a standstill and dug themselves in for the upcoming winter by the late autumn of 1914. The fast-moving advances gave way to a defensive stance, featuring intricate trench systems, deep bunkers, barbed wire entanglements, and the withering power of the machine gun.

The Battle of the Somme wasn’t one battle as much as a series of offensive attacks by British and French forces that lasted from July to November 1916. The nature of the Entente offensives fell into a regular pattern, starting with an opening barrage by the artillery on the German positions to be attacked. The Germans would hunker down in their underground bunkers as best they could, perhaps even withdrawing many of their troops to secondary trenches further back in their lines if they anticipated “trouble.”

The British and French troops would then advance out of their front line trenches under cover of the barrage. They moved slowly forward through the badly churned up terrain as best they could. Their hope was that the barrage had managed to cut the barbed wire entanglements enough so they could progress past them. With any luck it would also have killed (or at least shaken up) the enemy troops and their defensive positions to allow for a successful attack.

However, the Germans would usually survive the horrendous bombardment and emerge when it ceased, just in time to man their weapons and cut the advancing troops to ribbons. They would also hit the advancing forces with a counter barrage from their own artillery positions, close-range mortars, and hand-thrown bombs (grenades). Again, for the time being, the defending forces proved king of the battlefield as most offensive attacks ended in the slaughter of those trying to advance across “no man’s land.”

Osprey’s Somme 1916: British Infantryman versus German Infantryman is a nice primer for anyone interested in the makeup of British and German units on the Western Front during this period. The opening pages cover the origins and recruitment of the British and German units, along with training, weapons, and tactics. There are some nice period photos that compliment equally nice drawings and paintings showing standard uniforms, weapons, etc. The leadership characteristics of the opposing officers are covered, as well as a section on “Morale, Motivation and Logistics.”

Following this introduction, the book is then divided into three sections covering separate sub-battles during the overall Battle of the Somme: 1 July 1916, the Battle of Serre; 30 July, the Battle of Guillemont; and 26-27 September, the Battle of Thiepval. Each of these is broken down into an initial discussion covering the background of the battle, including the individual units on each side that took part and how the battle transpired. Again, the written narrative in each section is well-illustrated with appropriate period photographs, colored maps, and suitable color artwork.

The book ends with a short “Analysis & Conclusion.” According to the book the casualty figures from the Somme in 1916 were: 420,000 British, 204,000 French and 465,000 German troops killed, missing, wounded, or captured. Surely the only conclusion that can be drawn from this four-and-a-half month “effort” is that it was madness?

I would like to thank Osprey Publishing for providing this very interesting book to IPMS/USA for review. I recommend it highly for anyone wishing to understand what soldiers on both sides had to endure during World War I.