World War II Snipers, The Men, Their Guns, Their Stories 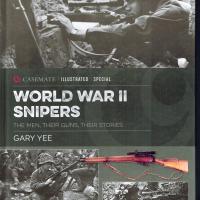 The book consists of three parts and a conclusion. There is a preface, acknowledgements and Intro at the beginning of the book. The book ends with notes to the text; a glossary, bibliography and index. Yes, this "baby" is big and full, and I mean "FULL" of information. I think too much to digest in one reading.

The first section of the book deals with the pre-war years; selection and training of a sniper.

Part Three goes into the weapons used by the sniper and discusses the weapons by country. It shows the different rifles used and the attachment to them such as the different scopes used by the sniper. There are close-ups of the sites, rails, mount components, as well as different types of stocks. It should be noted that you will find stories about several snipers during the war. I enjoyed especially the ones about the Russians snipers. I also have to admit that my knowledge of snipers during WWII was acquired by watching movies such as Stalingrad and many of the Hollywood films that show Japanese snipers on trees disposing of Marines. Historically, I believe this book is excellent and for those of us that like history it is even better. If you like history and want to learn about snipers during WWII this is the book for you.

My thanks to Casemate Publishers for allowing me to review the book.