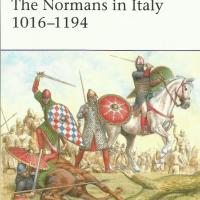 Normans, the direct descendants of Viking marauders who finally settled in France and the Low Countries, were a restless bunch. Due to population pressures many of the more ambitious traveled far afield, looking for conquest or new lands to call home. Italy was one such location. Here, they established a number of kingdoms, even going so far down the “boot” of Italy to settle on the island of Sicily, where many of their descendants remain to this day.

The story of this migration and the military events associated with it is the basis of this new book from Osprey. As is typical of Osprey works, this one is carefully researched, using surviving artifacts and stories to fill in the details. I know for my own that I was quite surprised to see what a cultural crossroads this area of the world was back then, with not only local, but Muslim and even Oriental influences impacting the weapons and tactics of this warrior breed. Quite the rich stew!

The color plates provided in the book do a good job of showing this polyglot influence, and the impact on both arms and armor is fascinating. It’s also interesting to see how the very early pre-heraldic markings on both shield and armor were developing during this period. As a fan of heraldry, I have always wondered if the various and colorful shields used by the earlier Vikings might have had meanings that have been lost to time. Were they clan or family markings? Were they handed down from father to son? Although this book can’t answer all of this directly, it does address some of the intentions of the markings on the Norman equipment, being used to distinguish leaders in the field for instance.

In any case, I found this to be a truly intriguing read, as I’d had no idea that the Normans had wandered so far afield, although it certainly makes sense. They were, after all, descendants of a curious and acquisitive people themselves.

As with almost all such Osprey titles I’ve read over the years, this one is chock full of ideas for the figure modeler, and it’s certainly given me some juicy ideas for a diorama or two. Highly recommended and well worth a look-see.

My thanks to Osprey Publishing for continuing to publish fascinating glimpses into exotic times and places, and to IPMS/USA for the read. Excellent! Happy modeling, all, and stay safe!