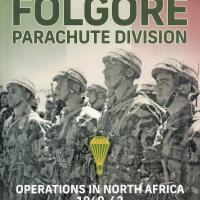 Casemate Publisher is distributing a book from Helion & Companion Publishers on “The Folgore Parachute Division, Operations in North Africa 1940-43”. The author has done extensive research on the topic and each chapter is profusely referenced.

Each chapter describes a very clearly defined period of time of the Division and has the very logical breakdown, as follows:

It also includes two appendices covering the Order of Battle and a list of recipients of the Gold Medal for Military Valor.

The main highlights on the history of the division covers its training - similar but not a direct copy of the German paratrooper force-, how the division was created for the invasion of Malta, its tactical objectives in the Malta Operation and how it never got deployed into Malta due to the lighting fast invasion of Rommel into Egypt (Rommel requested extra troops and supplies for its advance into Egypt, which in turn meant the Malta operation was first delayed, then suspended). At that point, the Folgore Division was deployed to North Africa, as an ‘elite’ light infantry Division, given their higher-than-average training levels.

Due to the nature of their training, they were highly trained in defensive operations and counter attacks, which were used prior to El Alamain and very intensively on the Southern Front of El Alamain, to the point that when they got the order to retreat, their lines had barely been breached, despite the incredibly high casualty rate.

During the retreat from El Alamein -mostly on foot- they had to abandon most of their equipment and virtually the Division ceased to exist. Roughly only 1 in 3 Folgore soldiers were able to escape capture, injury or both.

In 1943 the Folgore survivors were formed into a Batallion of 600 men and deployed for defensive warfare in Tunisia, were once again they bitterly fought against larger number of troops that were better equipped than them. The last 40 survivors finally surrender after the Battle of Takrouna, where the Folgore troops successfully rescued troops surrounded by New Zealand soldiers, before finding themselves surrounded by enemy forces and running out of ammunition.

The book ends with an analysis of the overall performance of the Folgore troops. In each battle they fought, they were able to hold their ground inflicting disproportionate casualties to the enemy forces. The main challenge they faced was that their deployment was never guided by the offensive nature of paratrooper operations, but rather by the defensive needs of a mislead Commando Supremo.

I highly recommend this book to any history aficionado. It is very well researched, includes hundreds of source references and it is written in a very easy to read style.

I would like to thank Casemate Publisher, Helion & Company and IPMS/USA for the review sample.