Lend-Lease and Soviet Aviation in the Second World War 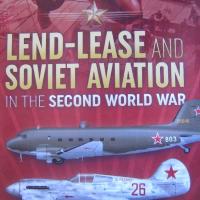 This is one of the first historical accounts of the Lend-Lease program designed to aid the Soviet Union in its war against Nazi Germany. The backgrounds are rather confused, because in the late thirties, the Soviets and the Nazis, along with the Italian Fascists, seemed to be working together to dominate nearly all of Eastern Europe. In 1939, The Germans invaded Poland, but they didn’t do it alone. They were aided by the Soviets, who attacked from the east. The Poles resisted, but the Germans and Russians were just too powerful, but for a while, it appeared that the Germans and Russians were allies.

The American and British governments had for a long time sold aviation technology and airplanes to the Russians, as after the Communist Revolution, the Russians had a long way to go in building up their industrial base. Some Russian designers, such as Igor Sikorsky, escaped while they could. A few Russian designers, notably, Tupolev, Polkarpov, and Mikoyan, set up design bureaus, but these were not always completely supported by the Soviet government, and the result was that Soviet aviation lagged behind the rest of the world in many respects. Some designers even worked while inmates in Soviet political prisons. However, several of the design groups managed to produce some very effective fighters, notable were Polikarpov’s I-15, I-153, and I-16’s, but these were becoming obsolete when faced with Germany’s Messerschmitt Bf-109. When Russia invaded Finland, the Finns had obtained fighters from various Western European countries, and they were quite successful against the Russian Air Force. The Finns fought the Russians because the Russians had invaded their country, not because they had any sympathy with the German Nazis.

In the late thirties, the Russians approached the British and Americans in order to obtain aircraft and engines that were in production for their air forces, and negotiations were successful in that both the British and Americans agreed to provide numbers of aircraft to the Soviets. Both sides cooperated in establishing routes by which these aircraft could reach the Soviet Union, including by sea to Murmansk, through the Middle East through Iran, and through the Bering strait from Alaska through Siberia. Since this route was close to Japan, it was fortunate that at the time, Russia and Japan were not at war with each other.

Although all countries attempted to keep their military technology secret, the Americans and British often invited Russian officers to view, inspect, and even fly examples of their military aircraft. Both Americans and British were willing to provide aircraft to the Soviets, although they tended to send aircraft that had been in production for several years, and that were in the process of being replaced by more modern types. It was for this reason that the Americans sent large numbers of bell P-39 and P-63 fighters, while the British sent a lot more Hurricanes than the later Spitfires, although both countries later send examples of the more advanced designs.

The American program to help the Russians became known as Lend lease, and was an Act of Congress specifically aimed at aiding the Soviet Union. It had nothing to do with supporting Soviet Communist Ideology, but was mainly aimed at defeating the Germans. When aircraft were delivered to the Russians, the problem was supporting these aircraft through maintenance and modifications, as Soviet fuels and lubricants were of lower quality than British and American products, and the Russians used things like aircraft instruments and weapons systems that the Allies didn’t have. The result was that the Russians had to run the airplanes through modification centers to modify the planes so that they could be operated under Russian conditions. One problem was the extremely low temperatures that forced the Russians to seek different solutions to such problems as aircraft heating and cooling, and lubrication of weapons and aircraft systems under extremely low temperatures. When later American products reached the Russians, their pilots were very impressed by the cabin heating systems in the American planes, as the Russians had nothing like that in their aircraft.

A total of 27 aircraft types reached the Soviets from the British and Americans, although a few of these were not part of the lend lease program. The following American types were sent: Curtiss P-40, O-52, & C-46, Bell P-39 & P-63, Republic P-47, North American P-51, B-25, & AT-6, Douglas A-20, DC-3/C-47, Consolidated PBY, and Vought OS2U. The British contributed the Hawker Hurricane and Typhoon, Supermarine Spitfire, Handley Page Hampden, De Havilland Mosquito, Short Stirling, and Armstrong Whitworth Albemarle. Accidental transfers included the Lockheed P-38 and PV-1, Boeing B-17 and B-29, Consolidated B-24, Avro Lancaster, and Supermarine Walrus.

As far as the B-29 was concerned, the Russians refused to return the B-29’s, and eventually tore them down and copied the airframes, resulting in the Tupolev TU-4 bomber and TU-70 airliner, which became standard types in the postwar Soviet Air Force.

The book follows a logical pattern of description of the evolution of the planes in question, along with their route of travel to the USSR. The problems associated with the service entries of the types, along with their combat records are described. At the end of each chapter is a series of black and white photos showing the aircraft immediately after arrival, and photos of the types in service. Most of the types include a set of three or four view drawings of the type, showing the Russian modifications, as for example, Russian rebuilds of Bell P-39 Aircobras and P-63 Kingcobras as two seat trainers. In addition, there is a center section with excellent color drawings of each type, which will be extremely useful to modelers who wish to include these types in their collections.

The text is remarkably well written, with only a very few typographical or grammatical errors, a significant accomplishment for a Russian author, although there is no mention of a translator. In that respect, the book is as good or better than most English language texts written by native English speakers. I found the book to be very enjoyable reading, and the writer was very objective, with excellent descriptions of the events.

This book covers a topic that I have not seen an objective historical account of before, and after reading it, you will have probably the best account of this period of history that you have ever seen, as it is full of factual accounts by people who were involved in the events, and lacks the political propaganda approach that one could expect to see from that part of the world. For historian and modeler alike, it is an excellent work, and I would highly recommend it for both.

Thanks to Helion & Company and Phil Peterson and Bill O’Malley of IPMS for the review copy.