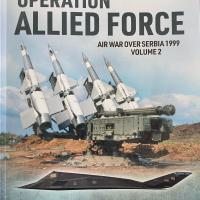 As good as that all sounds, this was a different type of conflict then NATO had prepared for. The command structure is examined in the first chapter. Problems arose when lessons learned in the recent Middle East wars were not carried over to OAF. The US assumed overall command and certain information was not shared with NATO allies. This created communication issues that hampered efficient operations. The same was true of dispersal of aircraft. Political restrictions meant a select few air bases were packed with aircraft they could barely accommodate. In addition, the routes into and out of the target areas were restricted to certain corridors giving an advantage to Serbian forces who used them in the F-117 downing. As in so many recent conflicts of this type, decisions were driven by a fear of collateral damage to people and property. Despite those efforts, there were incidence of attacks on friendly targets and civilians. The Serbian air defense forces were never eliminated like they were in the Iraq conflict. Several clever strategies, rapid mobility, decoys and improvised systems were used that forced NATO to expend a great deal of effort on locating, destroying or suppressing those assets. Radar operators quickly learned how to see what they needed to see without making themselves targets.

The book concludes with an overall assessment of the OAF operations. Even though the campaign forced the capitulation of Milkovich, it didn’t solve the conflict that exists to the present day. All the technology brought to this conflict still needed the human element to properly employ it. This book does a good job of explaining just how complex this operation really was.

As a modeling reference, there’s a lot to see here. All the photos are in color and the color illustrations include aircraft and vehicles most notably improvised Serbian missile launchers. As a historical reference, I learned a lot about this operation especially from the Serbian perspective. Recommended to those interested in OAF and the aircraft and armor used in it.

Many thanks to Casemate and IPMS for an informative read.